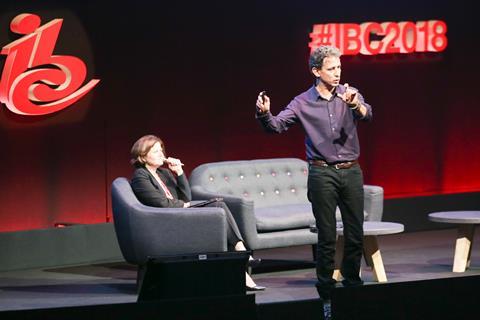 The evolution of more sophisticated analytical platforms which can measure and predict how popular particular characters and themes in stories are going to be are set to revolutionise the industry, said Bergquist, speaking at a Keynote IBC session on AI.

“We are standing on the cusp of a massive revolution in how media companies will be able to tell stories. It’s about telling stories that really resonate with people and when the stories are right media companies are going to take over the world. They are going to become much more powerful and successful.”

According to Bergquist, who is also director of the Data & Analytics Project at the Hollywood-funded University of Southern California’s Entertainment Technology Centre, his AI-based analytical platform can show which narrative attributes of film or TV content do better with audiences.

“We have an application which is parsing scripts to measure media tonality in scenes. We can map how emotions are represented in a film, we can map the emotional journeys of characters and how audiences respond, looking at the script and TV ratings.

“What we discovered is that if the character is about “becoming” it’s popular – when the action in the movie takes place inside a character the film does really well. It also shows that there are a lot of negative character traits in feature films – but audiences respond to more positive traits.”

Bergquist said AI analysis could help content owners like Disney develop huge content brands such as Star Wars. “The challenge is to find the right blend of innovation and adherence to traditional Star Wars themes. Innovate too much and you turn audiences off. I want to push creatives to be more creative.”

Asked if entertainment companies will take to more powerful AI-based analysis, he said: “We are making the kind of audience and content analytics capability that Netflix has built available to everybody. We have a completely new product and don’t know if people are going to embrace it.”

“The younger ones totally get this as it will allow them to create more compelling stories. The older ones hate it as they think it will mean reverting to the mean and everyone will be telling the same stories with maximum appeal.”

“Systems media rather than siloed media is going to revolutionise the industry,” argued Bergquist, referring to AI platforms which are capable of evolutionary meta-data learning which can analyse all media product and audience data, measuring the emotional tonality of scripts and mine social media responses to them.

“What is also clear is that everything that works in media – from pop songs to Pixar movies – have a particular tonal resonance,” said Bergquist, whose USC teamis developing AI and machine learning applications for the entertainment industry and has developed a quantitative model for how narrative structures drive performance for movies, trailers, and marketing campaigns.

Bergquist quipped: “Don’t listen to Elon Musk (who has predicted that machines are going to take over the earth). The AI revolution is going to happen and its going to be amazing.”