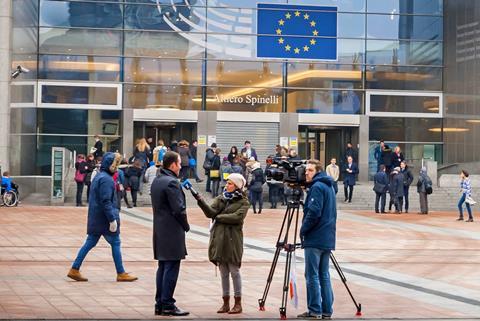 Broadcast radio and TV remain the most trusted media throughout Europe ahead of new media, according to the EBU’s latest report.

Radio is the most trusted medium by European (EU) citizens – trusted by 59% of the population with half of all EU citizens trusting TV.

According to the report the internet is trusted by only 32% of citizens and social media by 19%, which is down from 36% and 21% respectively from 2014.

The new report Trust in Media 2019, highlights the gap between people’s trust in traditional and new media.

The EBU released its report today on World Press Freedom Day which celebrates the fundamental principles of press freedom, to evaluate press freedom around the world, to defend the media from attacks on their independence and to pay tribute to journalists who have lost their lives in the exercise of their profession.

Quijada added: “This World Press Freedom Day, we should champion the valuable role of our public service Members in upholding democratic values and promoting a free and independent media landscape.”

The report also showed that more people tend to trust, rather than distrust, the written press.

Public service media (PSM) are among the top five most trusted news brands in more than 80% of North and Central European markets. In more than 60% of those markets, PSM is the number one brand for trusted news.

A positive correlation between the perceived trustworthiness of national news and citizens’ satisfaction with democracy means radio and television are indispensable assets for European society.

Trust in Media 2019 is based on data published in the Eurobarometer survey and gives an idea of European citizens’ perception of the trustworthiness of different types of media.

Greater global news literacy
The issues of trust and misinformation, new online business models, the impact of changing Facebook algorithms and the rise of new platforms and messaging apps are debated broadly across the industry.

He found: ”A wide range of different actors — from educators to technology companies — believe that raising news literacy would make people better able to separate fact from fiction, potentially limiting the spread of false information and leaving them better equipped to navigate partisan media environments.

Across the 18 countries included in the analysis, just over half at 52% were able to correctly identify the public broadcaster.

He explained: ”This varies nationally, with higher figures in countries like the UK at 73%, where the public broadcaster is by far the most widely used news source and only 46% of respondents in the US correctly identified PBS.

”Across all countries, 15% of respondents incorrectly thought that various commercial TV news outlets or newspapers were not primarily funded by advertising and around one-third, 34% said they did not know.

He found that trust in news from search engines and news from social media becomes less widespread as news literacy increases.