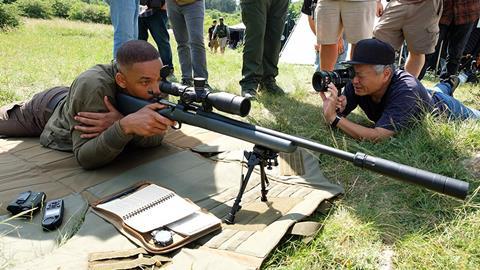 Behind the scenes: Gemini Man 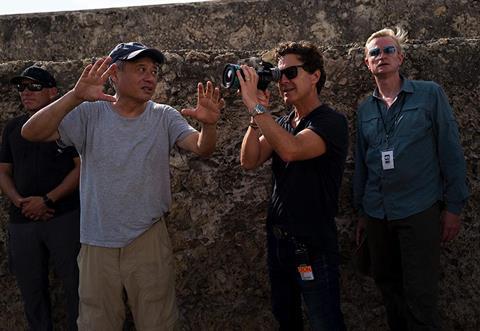 On the face of it, Gemini Man appears to be a conventional genre movie, but two things set it apart. For director Ang Lee – expert at making character driven drama but with his previous attempt at comic book action, Hulk, considered an honourable failure - this represents a departure. For Hollywood’s leading blockbuster producers Jerry Bruckheimer (Top Gun, Con Air, Pirates of the Caribbean) and SkyDance Media (Jack Reacher, Mission: Impossible – Ghost Protocol) and star Will Smith (I, Robot) this science fiction about an assassin confronting his own clone has too good a hook to pass up, but not so the decision to back their director in shooting the film with an extreme high frame rate.

That’s even more surprising given the box office failure of Lee’s last picture Billy Lynn’s Long Halftime Walk, which was also shot in 4K native stereoscopic 3D and at 120 frames a second.

There is something extraordinary, though, about watching a film displayed with a clarity of motion that Gemini Man cinematographer Dion Beebe ACS ASC has described as like “looking through a massive window.”

“Ang never considered shooting this film any other way. He fell in love with 3d on Life of Pi but recognised the difficulty of shooting it at 24FPS” Tim Squyres, ACE

If the story of an Iraq war homecoming proved not quite appropriate for such a device, might it be a perfect fit for a tale of an aging government assassin going up against a clone of his younger self?

“For Ang the interesting challenge was to explore the character in the story and still be respectful of satisfying the needs of a Hollywood action movie,” says editor Tim Squyres ACE, who has made The Ice Storm, Crouching Tiger, Hidden Dragon, and Life of Pi as part of the director’s core team.

“He never considered shooting this film any other way,” Squyres reports. “He fell in love with 3D on ‘Pi’ but also recognised the difficulty of shooting 3D at 24 frames a second. We learned we could solve those problems in shooting a higher frame rate.”

Lee’s experience making the Oscar winning Life of Pi converted him to stereoscopy as a storytelling tool, but he was dismayed that the motion blur, dim light and strobing that accompanied its theatrical projection had blighted the film’s acting performances.

“There were shots of [Suraj Sharma] bobbing up and down in a boat where his performance started to get lost in motion blur and we had to artificially sharpen his face, digitally replace his eyes,” Squyres says.

“Subsequently we shot tests of Ang’s proposed Joe Frazier – Muhammed Ali boxing movie at 24, 48, 60, 120 and at 60 it was clear that you could overcome those issues.

Squyres describes the look of HFR as “a kind of immediacy and presence that you are not used to.”

He adds: “You can see much more detail in the actor’s expressions. There are lot of things in 24 that look fine but at 60 looks like overacting. You can see much more of what the person is thinking and feeling, more nuances of their performance at 60 that you can’t see at 24.”

Acutely aware of this from Billy Lynn’s, Lee ensured he passed this point on to his actors.

“The differences are striking and do impact what you see in your normal medium close-up and close up shots,” Squyres says. “Will Smith knew this too and definitely modified his performance to the format.”

Production and dailies
The script for the film has been around for twenty years with directors like Tony Scott and actors including Sean Connery attached but, without the technology to believably put two versions of the same actor on screen, it had always been shelved.

“The idea was always to cast a leading actor who has had a strong screen presence over many decades, otherwise you could have two different actors playing the role,” Squyres explains. “The fact that they are recognisable today and from when they were younger is the point. Will Smith fits that mould perfectly.” 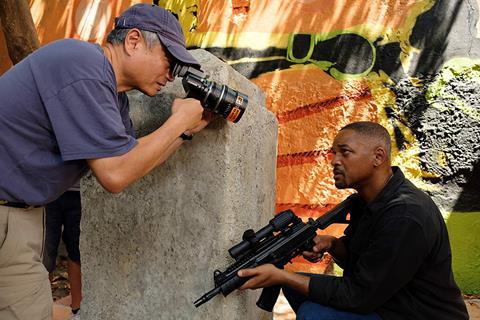 Squyres: Viewed and cut everything at lower data rate of HD 60 fps on a 15ft screen

The first couple of months of the shoot took place in Savannah, Georgia. The production then shot three weeks in Cartagena, the beautiful city on the north coast of Colombia before moving to Budapest for two months.

Beebe filmed with Alexa M cameras mounted on a stereo rig custom made by Stereotec in Germany. Each camera delivered 3.2K resolution which was upscaled in the final picture to 4K.

For dailies viewing, the team built a screening room with a pair of 4K Christie Mirage projectors capable of playing back each eye (for 3D) at 120. For editorial in New York Squyres viewed and cut everything at a lower data rate of HD 60 fps viewed on a 15ft screen.

“Technically the Avid can support 4K workflows but in terms of real world performance we stuck with HD,” he says.

Frame blending
The Avid also supports 60 frames per second but not 120 so the production had to halve the frame rates in order to work on the material. Instead of simply throwing away every other frame, they employed TrueMotion software made by RealD to process the frames in such a way that allowed for a smoother and less stuttering effect.

This is only possible because the film was shot using a 360-degree open shutter so there were no gaps between frames. Using the software’s synthetic shutter, different frame rate versions of the film could be output from the 120 master (with 120 being divisible by 60 and 24 the math works out).

“It’s hard to describe but typically when we think about resolution it’s as a spatial number of pixels,” Squyres says. “HFR is temporal – it is resolution in time. You can think of it like a higher sampling rate for music.

“When we made Billy Lynn’s we never thought to put it into theatres at 120. The reason we shot at 120 at all was because it would deliver a better final picture at 60.”

The filmmakers also had the option of alternating the frame rate between scenes but chose in the end to maintain a consistent 120 frame rate throughout.

“We learned in tests that if you start out looking at 24 and switch up frame rates the change takes you out of the movie. You get used to it after a few minutes but if you switch back down to 24 then it’s distracting. There are all sorts of creative reasons why you might want to do this for a particular story. Ready, Player One, for example, might work since you are moving between different worlds. But it wasn’t right for a more conventional drama like ours.”

Cloning Will Smith
In Gemini Man, the main character, Henry, confronts Junior, the younger clone. Both are played by Will Smith with Junior digitally created by VFX house Weta.

“The term ‘de-aging’ implies that Smith’s face was digitally replaced pixel by pixel in post,” Squyres explains. “That’s not what we did. Junior is a completely digital character.”

For VFX purposes there were two sets of scenes; ones with Henry and Junior together and ones just with Junior often playing against Clay Varris (Clive Owen) who is Henry’s former mentor. In the latter shots, Will Smith played Junior and in some instances he’d was costumed correctly so they only needed to replace his head not his whole body. Smith was performance captured for these scenes and the data translated into animation by Weta. 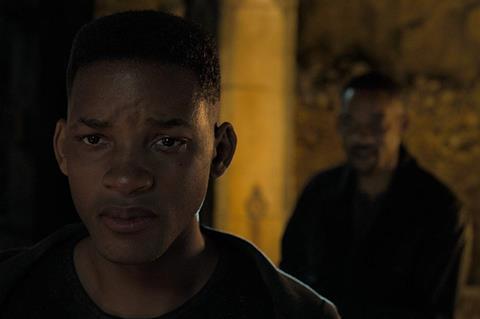 Younger clone: A “de-aged” Will Smith

In scenes in which the pair are together, Junior is played by a stand-in actor and later, on a mocap stage, the scene was replicated with Smith wearing a full body suit and a mic for his vocal performance.

“We’d record that with a dozen cameras to get the references from all angles from which I’d pick the angle that best matched the shot I was trying to work it into. For a long time our rough cut would feature shots of our stand-in actor below a picture-in-picture of Will Smith’s mocap filmed at approximately the same angle.”

3D matters
Shooting and presenting in high frame rates has the added benefit of clearing up one of Lee’s bugbears with 3D which is the murkiness of viewing through glasses.

“It’s the 3D which remains important to Ang,” his editor says. “I always cut in 3D because when you are making a 3D picture you think make different decisions than you would in 2D. Instead of imagining what the 3D would be like, I’d rather work in it from the start.”

It’s in Gemini Man’s dialogue scenes rather than its action sequences where the stereo has most impact.

“We might start out a scene with the characters within the frame and then start to bring them forward ever so slowly into our space as the scene progresses. You never want to go so far as have the audience really aware of what you’re doing but it’s surprising how far you can go push it without it being a problem.”

“An audience goes to see a movie not a technology” Tim Squyres, ACE

“An audience goes to see a movie not a technology,” he rightly says. “It takes a few minutes for them to get used to what they are seeing… but if you have a story that pulls them in then the technology will gain a visceral hold on them.”

Wide distribution
If Sony failed to understand the technology or support Billy Lynn’s with any kind of wide HFR release, Paramount believes it may have a hit on its hands. 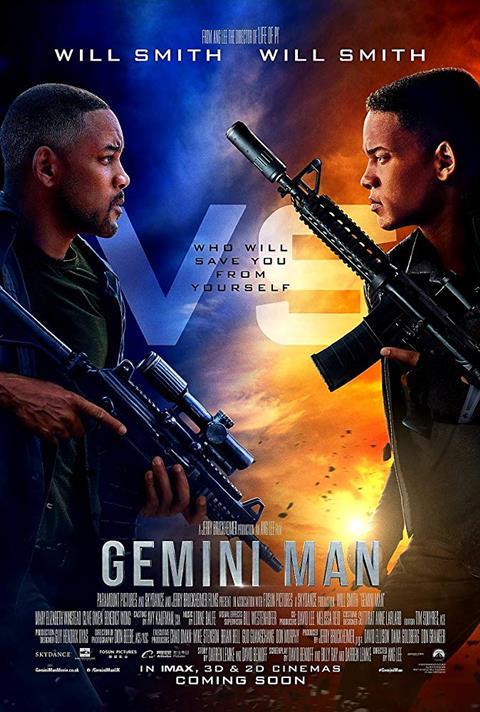 The film is being distributed in versions including a top-of-the-range 4K 3D 240 (120 per eye) and extreme brightness of 28 foot-lamberts per eye across up to 100 new screens in China, Taiwan and Hong Kong.

Screens with Dolby Vision will be able to show 120 2K at 14fl brightness and the main worldwide release is likely to be at 2K 3D 60.

No other HFR studio release is currently scheduled although James Cameron is shooting the Avatar sequels for Disney in high frame rates and Ang Lee is backing an effort by China’s Cinity Film Lab to help filmmakers understand how to shoot content using the format.

The jury is out as to whether there is some intrinsic connection between our eyes and brain which makes enjoying a narrative film at 24 more natural than one at 120, or whether it’s just a question of shaking our cultural habit before we become attuned to the experience.

“It’s a classic chicken and egg situation,” says IHS Screen’s director of cinema David Hancock. “[Gemini Man] may not be the one, but someone somewhere has got to advance cinema forward otherwise nothing changes.”