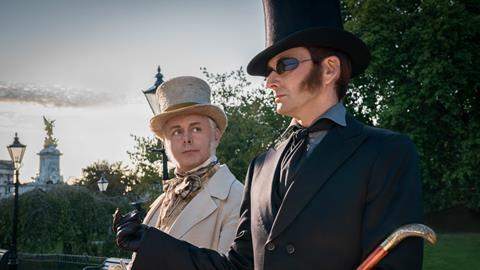 Behind the scenes: Good Omens 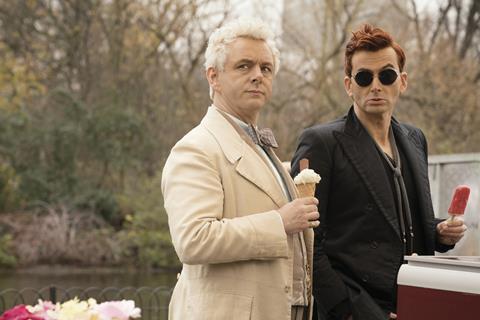 David Tennant is the demon Crowley and Michael Sheen the angel Aziraphale in the TV incarnation of Terry Pratchett and Neil Gaiman’s fantasy novel Good Omens – written in 1990 – in which the two lead characters join forces to prevent Death, War, Famine, and Pollution becoming the Four Horseman of the Apocalypse.

Produced by BBC Studios and released on Amazon Prime Video with Gaiman as showrunner, the ‘comedic apocalyptic’ miniseries “has a little bit of everything” according to the show’s VFX supervisor and Milk co-founder, Jean-Claude Deguara.

That’s not surprising given the novel is part parody of 1976 satanic horror The Omen, part Discworld and part satire of religious belief from the ‘twisted minds’ (as the trailer puts it) of the two cult authors. The anarchic mix previously attracted Monty Python alumni Terry Gilliam and Terry Jones to set up separate versions of the project but only a BBC radio show of the book has been made before.

American Gods writer Gaiman has a development deal with Amazon for this and future shows and describes the series as a standalone that also draws on elements from a book sequel he had planned with Pratchett.

“When you prepare VFX for most shows you usually have specific areas to focus on, like a spaceship, but because the source is a book and we’re in charge of the whole 660 shot order, you don’t linger in one place for too long and the effects are very rarely the same,” Deguara says.

Tying down a look for the show was the tricky first task. “The book itself is a great reference and unusually we had six complete scripts to work from,” he says. “Our starting point was to work out what the main VFX components might be and to come up with a methodology that we thought would be a good way of solving them.”

Gaiman and director Douglas Mackinnon (Doctor Who, Line of Duty) wanted to film as much in-camera as they could, and this grounding in reality was the key for the VFX team.

“Neil didn’t want it to be too fantastical or for the VFX to draw attention to itself,” explains VFX producer Jenna Powell. “Even though it’s a fantasy, the idea was to make the story world recognisable to the one we live in, so it becomes believable for the audience.” 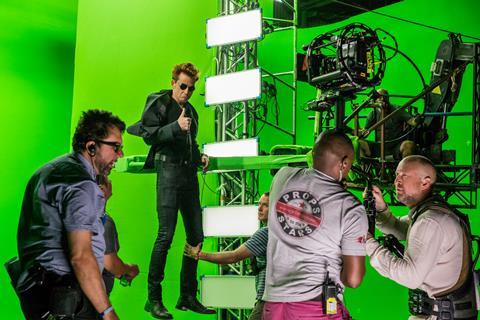 The antichrist’s loyal hellhound, for example, might be depicted as a ferocious dog-shaped beast. “We’d initially conceptualised this as a big monstrous creature, but we reined it back,” Deguara says. “We cast and photo-scanned a Great Dane and then didn’t redesign it massively. It wasn’t intended to be a caricature. We made it bit made more aggressive by lengthening its teeth and sinking the eyes, but the colouring and pattern of the dog’s coat remained the same.”

A vintage 1926 black Bentley which Crowley proudly keeps in mint condition features prominently in a number of scenes. The production designers found a classic model (a 1934 3.5 Derby Coupe Thrupp & Maberly) from which Milk made a full digital scan in order to recreate cg versions for comping into the live action photography. A scale interior of the car was also built in which to film the actors against green screen or rear projection at West London Studios.

“One day when they’d wrapped filming, we drove the car to our offices in Soho so the modellers and texturers could get a better look at it,” Deguara says. “Being in actual contact with the object you are animating is so much better for the final shot than relying on scans or photographs.

He explains: “You can see how dust sits on the car and what it feels like to sit in the leather seats, the thickness of glass in the windscreen and how the windscreen wipers work. So many little things like this help make the object appear tactile and photoreal. On our first renders the car was looking a little lifeless, the headlamps perhaps didn’t have the right depth. We tweaked it and in later renders you find your eyes drawn to the ‘eyes’ of the car.”

Scanning
During the ‘Armageddon Incident’, Crowley is forced to put the Bentley through a devastating ride, during which the car catches fire and is burnt to a crisp. Milk had to come up with the look of the car on fire at different stages, with the metal on its chassis gradually getting hotter. 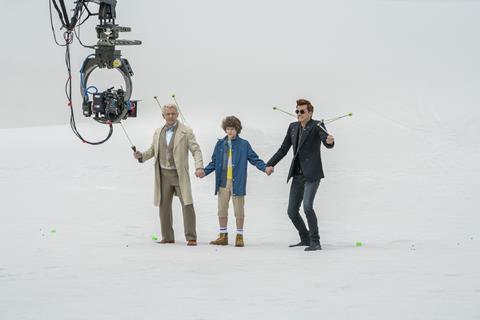 The lead actors and other cast, including Miranda Richardson, John Hamm, Michael McKean and Jack Whitehall, were scanned in costume, as were key props and sets. Deguara explains that the photo-scans consist of hundreds of still images digitally processed into a 3D point cloud. Using that data, animators and modellers can deploy software to build texture.

“It’s a quicker and more economical version of Lidar scanning,” he explains. “You may not have quite the detail of a laser scan, but it works perfectly when working to a tight schedule. It means that for any scene we can talk with the director and cinematographer about camera placement and quickly populate a scene with rough VFX to help them visualise the idea.

“We began building CG assets at the start of the shoot so that when Neil and Doug came around to a specific scene, I could show them the conceptual work we’d done and make sure everyone in the office at Milk was working to the right frame. Being able to make progress like this during the shoot was essential to meeting the tight schedule.”

TV timeframes tend to be tight and in this case the crew had five months from the end of principal photography last August to deliver episode 1 by the end of January.

The entirety of Soho’s Broadwick Street was also scanned after test shoots of a generic building originally planned for the CG model of London turned out not to have the unique feel that Gaiman and Mackinnon were after.

“If you take a step back and look up at the buildings in Soho you see they are all architecturally unique so that’s what we were looking to replicate,” says Powell. “Douglas also wanted to retain this feeling of a busy, vibrant Soho with people rushing past in all directions.”

They paid attention to scanning the exterior and interior of an antique bookshop which is Aziraphale’s hideaway. The shop’s physical set was married to the CG. “We designed it so that everything 15 metres away from the camera in any direction was digital.”

The team also had to come up with designs for a 400-foot tall CG Satan. “The initial concept was extremely monstrous,” explains Powell. “It looked great, but Neil was adamant that he wanted it grounded in more a human form. We adapted the idea, notably by changing horns on Satan’s head to form a crown. Neil loved that so we started building this version and parked it for a while.”

After the actor originally cast as Satan dropped out at the last minute, Benedict Cumberbatch boarded the project. “We were already well into one of the sequences but when Benedict’s voice performance really gave the character the direction it needed. As soon as we had that the process became a lot quicker.

Further creature work included a Kraken, CG snakes and bunnies, and the angel and demon’s wings along with environment work ranging from maggots, tornado and flaming swords to ‘transitions’ and ‘disintegrations’.

Rendering was in Arnold, compositing in Nuke with effects in Houdini and Maya for rigging creature work and muscle simulation in Ziva. 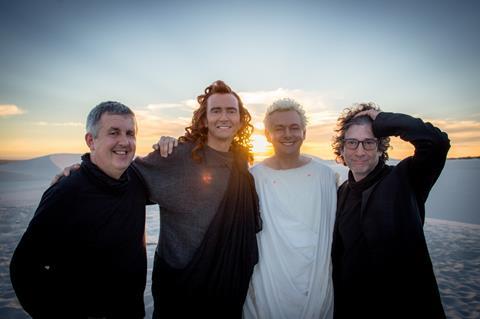 Behind the scenes: Good Omens team

Director of photography Gavin Finney (Terry Pratchett’s Hogfather, Wolf Hall) shot ‘A’ camera on ARRI Alexa SXT supplemented with Alexa Minis and drone work using a Panasonic GH5. Locations included London and Oxfordshire with sequences including those of the Garden of Eden filmed in and around Cape Town. Cardiff’s Bang! Post production managed voice work, including ADR across the 200 speaking parts. The grade was made at Molinare by chief colorist Gareth Spensley.

“We worked closely with Douglas and Neil to bring their vision to life, creating numerous invisible fixes that keep viewers firmly in the fantasy world they created,” McGinley says.