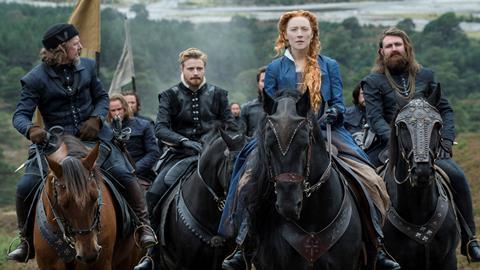 The craft of cinematography is at risk in this era of digitally shot films, warns Oscar-nominated DoP John Mathieson, whose latest films include Mary Queen of Scots and Pokémon: Detective Pikachu.

The fight to keep film alive is typically couched in terms of its superior look to video, but according to John Mathieson digital capture is in danger of corrupting the craft of cinematography itself. 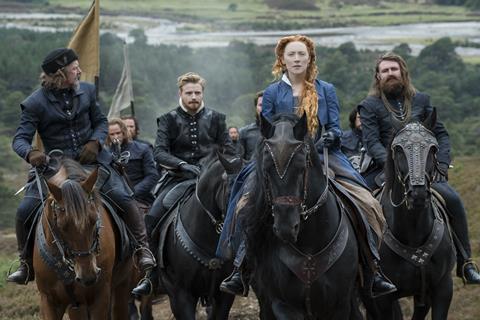 “Any DP will be a better DP if they shot some film,” he says. “They would be working with their eye to judge exposure, looking at the light rather studying a monitor.”

With credits including Kingdom of Heaven, Brighton Rock, Hannibal, 47 Ronin, Robin Hood and X-Men: First Class to go with Oscar nominations for Gladiator (2000) and The Phantom of the Opera (2004), the British director of photography has the authority to pull no punches.

Mathieson honed his craft in the 1990s shooting commercials for Ridley Scott’s RSA Films and music videos for artists including Madonna, U2 and Massive Attack. He shot a couple of features for French director Karim Dridi before his work as visual effects cinematographer on Enemy of the State for director Tony Scott at Mill Film caught the eye of Ridley Scott who invited him to lens his next picture, Gladiator.

He says there are several scenes in the multi-Oscar winning film featuring the Colosseum in which the lighting source appears to emanate from different angles, a consequence of the half physical and half CG model build of the centrepiece set and the edit process.

“Nobody has ever pulled me up on it,” he says. “It doesn’t matter if the light may appear from a different place if you believe in the storytelling.”

This is Mathieson’s fundamental beef. He argues that a background working with film using “unreliable” light meters made cinematographer’s reliant on their own judgement, discipline and artistic intent.

“To a large extent you were working in the dark, never completely sure that what you saw on set one day will transfer to the prints you see as dailies the next,” he says. “But the whole ‘I’ll fix it later in post’ mentality is something I cannot subscribe to. With digital you don’t have to be a craftsman. You can shoot and add colour even change exposure in hindsight rather than sculpt instinctively in stone.”

Mathieson views all digital cameras as essentially inferior to negative but has still shot digital for major movies. Arguably he was forced to for The Man from U.N.C.L.E (2015) when principal photography coincided with the shuttering of Technicolor’s UK film print lab, albeit selecting lenses (like Technovision spherical glass) which were designed to get the best out of celluloid.

Film might produce the colours of a “burnt Renaissance painting” rather than the “synthetic primaries” of digital but this proved ideal for director Guy Ritchie’s 1960’s pastiche.

He shot 35mm for Matthew Vaughn’s X-Men: First Class but used ARRI Raw for Marvel’s gritty Wolverine movie Logan on location around New Orleans. He was careful to “retain the feeling of a scorching desert” by avoiding perfectly matched interior and exterior exposures.

More recently he took over from DP Seamus McGarvey in pre-production for historical drama Mary Queen of Scots with the decision to shoot digital already in place.

For this he decided to pair Panavision’s digital Millenium DXL camera with Sphero 65 glass of the type which had been dusted down for Quentin Tarantino’s The Hateful Eight and previously used on Lawrence of Arabia. “These [lenses] are less susceptible to flare and glare than anamorphic glass,” he explains. They also “held a good grain structure” when displayed on a large screen, despite being a native digital image.

“Films should have a depth and a contrast to them but all too often digital shot films have a flat and muddy look. To me, that means the DP can check a computer programme but they can’t light a scene or put their stamp on it.” 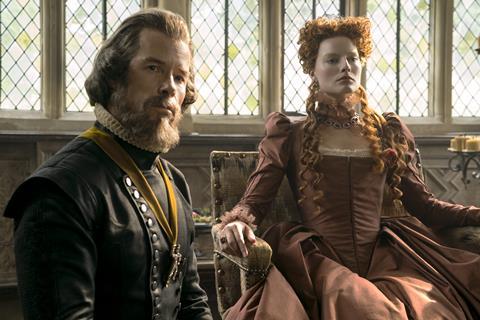 Secret is not to over light: Mary Queen of Scots

“I mean, if it’s an old house or a damp castle you don’t light it like an office – you try and respect the location and period [of the story] by lighting from outside, even if that is through an arrow slit. That may make the corners of your scene very dark but the director should know not to direct actors to walk over there.”

Mathieson is not a fan of High Dynamic Range (HDR) either, a process which he says intrudes too much into the image.

“If I’ve already made the choice on-set that you can’t look into the darkest parts of the picture then I want you to concentrate on the actor’s faces. You might not be able to see into every corner like you can with digital sensors but you can sure as hell feel the location, the atmosphere.”

He points out that for Gladiator and Phantom he shot candlelit scenes – on film, a medium not as sensitive to light as current digital cine cameras.

“If you shoot for HDR illumination then your film will look like hell,” he insists. “If you want a high contrast look, like a Michael Bay film, then it’s perfect, but not if you want subtle tones, the feel of wind fluttering the hair. HDR kills a delicate touch.”

He dislikes the increasing reliance on Raw acquisition within the industry because he feels it makes cinematographers lazy and delivers lower aesthetic returns.

“I think films should have a depth and a contrast to them but all too often digital shot films have a flat and muddy look. To me, that means the DP can check a computer programme but they can’t light a scene or put their stamp on it.”

So strongly does he believe this that, he warns, the craft is at risk.

“For most of cinema history the director of photography, the gaffers and focus pullers, have been respected for their ability to shape, compose, to light and record a scene. The director would have to trust that the DP will interpret their vision. When a director and their DP sit at the back of the set behind monitors and vector scopes and dial up lighting or change gels and colour temperatures at the press of a button, these core skills are being eroded.

“Making a lighting change like this means you are not committing to it. This is not the same as seeing the scene with your eyes.”

“The whole argument that film is too expensive is evangelist propaganda Bible-bashing rubbish. Film is not out of date if it’s better than digital – which it is.”

Greenscreen talent drain
He concedes that there is a place for massive stories told in VFX using a computer, “but the sadness is that there are young DPs whose talent is being overlooked in the blind rush to digital. Anyone who can work a 4K camera which comes straight out of a box with its own lens has not, to my mind, learned the skills to be called a DP.”

Understandably, the 57-year old steers clear of projects involving lots of VFX and greenscreen. “I could teach you how to light a greenscreen in half an hour,” he declares. “Any young DP can light greenscreen but can they really model light or create ambience?”

He continues, “The studios love greenscreen because they can fiddle about with [the picture] later, change elements in a shot, take out entire characters. When you are working with much greenscreen you are just part of the animation process. You’re no longer primarily responsible for shaping the look of the film.”

But sometimes he gets it wrong. Mathieson says he turned down offers to lens several Harry Potter films including both parts of the finale Harry Potter and the Deathly Hallows because he felt they had too much green screen work.

“What an idiot I was. Quite a lot of Potter turned out to be shot for real.”

A dark tale
Mary Queen of Scots is about as far from a Marvel extravaganza as stories get. The true dark tale features powerhouse acting roles for Saoirse Ronan and Margot Robbie and takes us back to a remarkable point in history when Elizabeth was the first woman to rule England and Mary was the first Queen of Scotland. Pre-production happened months before the MeToo movement gathered momentum but there are clear parallels.

“It is about two women in a very male dominated world, women who have power because of their birth but who live in a society in which women in general had no rights at all. [Director] Josie Rourke wanted to show what it was like to be a woman in rooms full of men who felt their political power being weakened.” 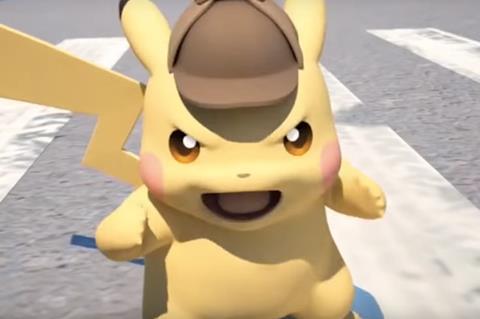 A big part of what we were trying to do was get behind the pre-conception we have of these women. Elizabeth is one of the most recognisable characters in history, but do we really know what shaped her? The film is an attempt to understand the relationship these women had with each other. Both led a damned existence.”

Mathieson is currently in post-production on Pokémon: Detective Pikachu, a live action version of the monster catching video game phenomenon, starring Ryan Reynolds. You might think such a project to be laden with the sort of VFX and greenscreen which Mathieson so dislikes, but director Rob Letterman (Goosebumps) wanted to shoot on film using performance capture.

Fallacy of film expense
“The whole argument that film is too expensive is evangelist propaganda Bible-bashing rubbish,” says Mathieson. “Film is not out of date if it’s better than digital – which it is.”

The discipline that came with exposing reels of negative has been lost, to the detriment of both the art and the budget, he says.

“The dailies process [where a director, DP and other creatives review the previous day’s material] is a crucial part of the process. It can give you confidence in what you’ve shot and a guide to shaping the material you will shoot. With film, you tend to show 15-minutes worth of master material. Because your shoot ratio is so much higher with digital you will be getting over two hours of dailies to look at. There simply isn’t time to review it all thoroughly.

“Because you shoot so much with digital it means your cameras are rolling for longer, which means everyone from set designer to costume department has to work longer days. When each hour of a digital production costs, say, $60,000 then all the overtime payments alone makes film more economical.”

He is attentive to the digital finishing process but finds that “noodling” with the footage can end up watering down his initial instincts.

“If you fiddle with the image too much the more you risk ruining its rhythm. Maybe the end result is rough around the edges, but I’d rather have that than a piece which is bland and boring. The Japanese have a nice aphorism for this which is ‘Perfection in imperfection’.