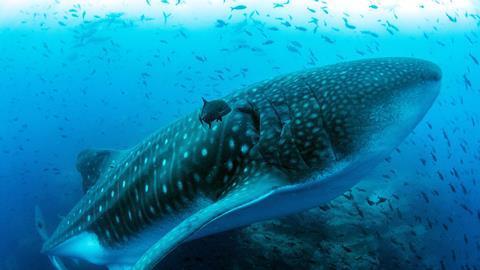 In the first of two articles on the BBC’s natural history blockbuster sequel Blue Planet 2, Will Strauss details the filming techniques and camera technology used to capture elements of the world’s oceans that have never been seen before.

Back in 2001, the original The Blue Planet series took viewers to parts of the ocean that had never previously been shown on TV. Winning countless awards, it cemented the BBC Natural History Unit’s reputation for excellence in underwater filming.

Fast forward 16 years and the sequel achieves that same feat (and will doubtless win more awards), but it goes deeper still, using innovative technology to reveal more marine worlds and aquatic habits from the depths of Antarctica to the vibrancy of a Coral Reef.

“The ocean is the most exciting place for us to be right now because scientific discoveries and new technologies have given us a completely fresh perspective on life beneath the waves,” says executive producer James Honeyborne.

“This series reveals new stories, featuring spectacular new places and extraordinary new animal behaviours that help us to better appreciate the wonder, magic and importance of the seas.”

To capture the footage that takes the viewers on this journey, the underwater camera crew used a range of devices that were developed specifically for the programme.

One example, used for shots in the high-artic, is a Ultra High Definition (UHD) ‘mega-dome’. Built in conjunction with camera housing developer Gates Underwater Products, the 24-inch domed port acted as a split-screen lens allowing the crew to achieve perfect focus and exposure, both above and below the waterline. One of the most important shots captured by the mega-dome was of a mother walrus and her calf, hauled out on an iceberg. 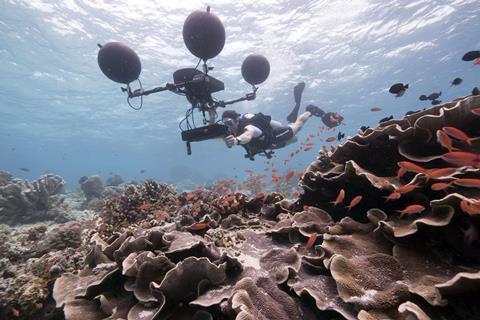 A multi-directional hydrophone records the sounds of the reef

“A big challenge of filming underwater is giving a sense of place as all too often things can feel very big and very blue,” says Honeyborne. “To connect with any character and to fully understand them, it is really important to understand their world. The mega-dome allows us to clearly contextualise the worlds above water, and below, at the same time. When we film the walrus sitting on an iceberg, for instance, you can see both what’s going on the huge iceberg that’s floating beneath.”

Another innovation was a UHD tow-cam that allowed the filming of predatory fish and dolphins head-on. Used off the coast of Costa Rica, the camera, as the name suggests, could be towed behind a boat, capturing the aquatic protagonists as they sped through the open ocean.

Suction-cams that offer the point-of-view (POV) of a whale shark and a UHD motion-control time-lapse rig for filming rock pools were also used.

The technology used on Blue Planet 2 is a world away from the equipment used on the first series.

To illustrate the changes that have occurred between the original and the sequel, Blue Planet 2 used UHD drones to witness oceanic events from above while Blue Planet 1 shot on 16mm celluloid film, using helicopters. The contrast could hardly be greater.

Another technological change that helped significantly with the making of the series actually has nothing to do with cameras at all - but at the same time has everything to do with filming. Advances in rebreather diving technology, in which the breathing gas is recirculated, has enabled longer shooting time beneath the waves.

“For the first time, we can be under water, staking out and just sitting and observing,” explains Honeyborne. “Before you’d have had only 45-minute dives. Now, we’ve got three hour dives which is just revolutionary.”

While breathing for longer made a huge difference to the crew, two of the most important imaging breakthroughs involved the use of low-light and infrared cameras during night shoots and probe cameras for getting up close and personal with tiny fish.

The UHD low-light cameras were used to great effect in the Sea of Cortez. Here, highly sensitive Canon and Sony cameras captured Noctiluca ‘sea sparkles’ glowing at night, around the wing beats of shoaling mobula rays. 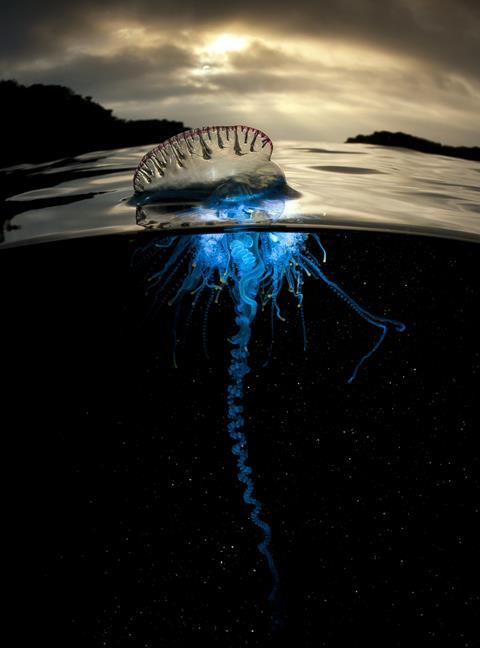 Mark Brownlow, the series producer, says low light technology is developing so fast that “we have scenes we have only just filmed because the technology just the year before didn’t exist.”

It was certainly worth the wait, as the blue trails that were created by the rays, stirring up the plankton as they go, had never perviously been captured on video.

The infrared underwater cameras allowed for what Brownlow describes as a “horror sequence” with the ‘bobbit worm’.

“If we’d shone a white light on this nocturnal ambush predator, it would have just stayed in its hole,” he reveals. “But it can’t detect infrared light so even though we’re filming in complete darkness, and can only see what’s going on through the viewfinder, we can capture behaviour that’s never been seen before.”

The UHD underwater probe cameras - consisting of a barrel of lenses with a tiny front element - were created to capture footage of small reef fish inside coral cracks.

They allow Blue Planet 2 to show in detail how a coral trout attempts to catch those tiny fish.

“The coral grouper can’t always hunt effectively by himself, because there are so many hiding places all over the reef for the little fish that he eats,” says Jonathan Smith, producer of the Coral Reefs episode. “What we discovered is that this fish is capable of forward planning and co-operatively hunting with a completely unrelated animal, in this case an octopus.”

The grouper, using movement and colour, attracts the attention of the octopus who, as part of what appears to be a game, then uses its tentacles to flush out the fish.

“We managed to get inside the reef – and you’re looking in the reef like you’re a little fish with these octopus tentacles coming down all around you,” he says. “You really feel like you’re experiencing this behaviour.”

Without the underwater probe cameras, they wouldn’t have got these immersive shots and most likely would’ve ended up filming most of it from slightly above, adds Smith.

“It’s the only way in a six minute sequence that you can truly understand it and truly come into their world. In the case of the coral trout and the octopus it’s a new story, new to science since the original Blue Planet was filmed.”

In the UK it will air on BBC1 from Sunday 29 October.