In the second in a series of interviews with inspirational women in the run up to International Women’s Day, director of photography Carolina Costa reveals what motivates her.

Selected as one of American Cinematographer’s Rising Stars of 2018, Brazilian cinematographer Carolina Costa has traveled the world photographing feature films, documentaries, shorts and commercials. She most recently shot director Minhal Baig’s coming-of-age story Hala, which premiered at Sundance and to which Apple acquired worldwide rights. 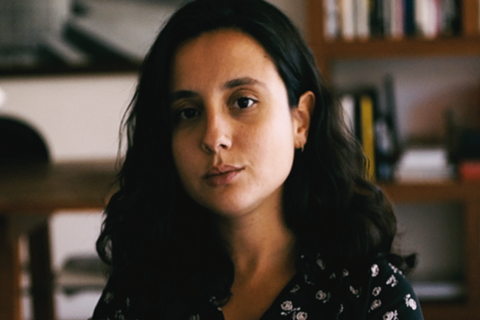 “When I was 15, I was already working with a photographer, from his lab in the back of his house,” Costa recalls of her childhood in Brazil.

“That’s where my passion for images started. I got my first camera and went around shooting, and I learned the basics about exposure and composition.”

She studied journalism in Brazil then moved to London in 2005 to pursue film at the University of the Arts.

“The [college] programme was very general and more theory than practice but there were a few of us who wanted to shoot so I spent my days in the camera room playing with equipment,” she recalls. “It was just very clear in my mind that I wanted to be a cinematographer.”

“In her career she had moved from being a clapper-loader right into being a cinematographer and she told me to go after what I wanted. I’ve been told so many times that I would never make it as a cinematographer but you have to keep pushing and hopefully someone will give you a break.”

At a dead end after a succession of low budget music videos, shorts and documentaries during which Costa had herself progressed from clapper loading to DP, she applied to the American Film Institute, moved to LA and completed a Masters in Cinematography.

“I wanted to shoot narrative films and the AFI (American Film Institute) opened that door for me. I learned a tremendous amount, technically. It also made me trust my instincts, and that is the tool I use the most.”

Her AFI thesis film Way in Rye went on to compete at Cameraimage in Poland. Her AFI alumni short Contrapelo, about a Mexican barber who is forced to shave the leader of a drug cartel, premiered at Tribeca before being Oscar nominated in 2014.

That led to The Chosen Ones, a sex-trafficking drama directed by David Pablos which shot on location in Tijuana, Mexico and premiered at Cannes before winning five Mexican Academy of Film Arts and Sciences’ Ariel Awards, including Costa’s for Best Cinematography. 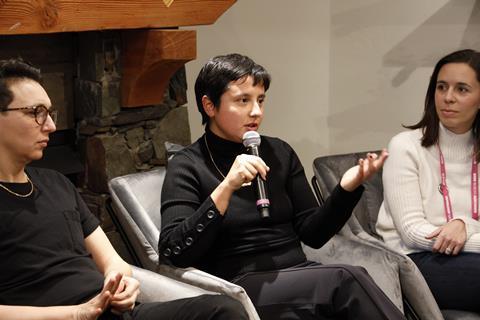 Costa (centre) on an AFI Panel at the Sundance Canon Creative Studio.

Social justice, gender identity and characters forced outside the system are a consistent theme running throughout this work.

“I’m in a fortunate position now where can choose my projects and I am mostly interested in telling stories about immigration or movies build around female leads.

“I always try to and portray these characters with empathy, to understand why these people have made these choices and why here, today.”

Crystal Swan was shot on location in Minsk, Belarus and is about a young female DJ whose American dream is derailed by a typo in a forged US Visa application. Icebox is a drama about a boy trapped in the US immigration system.

Hala is an intimate look at the experience of growing up as a Muslim-American teenaged girl in America. 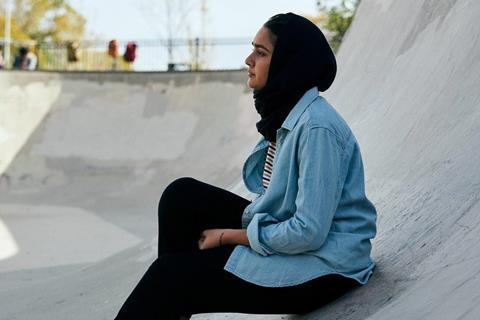 “These are the type of stories not seen that any screen let alone an American screen.

”It’s important to me as an artist and as a person that these stories are told. These kind of stories are always hard to get funding – but once they get started they tend to gravitate toward someone like me.”

Director Minhal Baig made it on condition of an inclusion rider, a contract clause that guarantees a certain amount of diversity on set. Aside from Costa, the film’s production designer, composer and editor were female and its executive produced by Jada Pinkett Smith.

“One of the challenges of the lighting design for Hala is that, because we’re depicting a Muslim family, the direction in which they prey to Mecca is very important. We were shooting at a house on location in Chicago and once we’d decided on a direction for Mecca (the northeast) we had to stick with that which meant we couldn’t cheat on the direction of our principal light sources. The direction of where the sun entered this house was hugely important philosophically and aesthetically in the film.”

Her commitment to social projects extends to commercials. She shot The Journey, a spot for Mexican soft drink brand Jarritos showcasing the struggles - and triumphs - of immigrants living in the US.

“I was hired to the dream/nightmare sequences but in the end I collaborated quite a deal with the main unit. I learned a lot about working with natural light combined with operatic camera movement.”

Those are lessons she’d taken into Wander Darkly, a horror shot in New Mexico starring Sienna Miller and Rogue One actor Diego Luna.

“My mother has been a huge influence on me. She changed her career so many times and started a fresh and this gave me the courage to not be fearful of what’s about to come. It’s about trusting your instinct.”