Notes from the frontier of digital storytelling 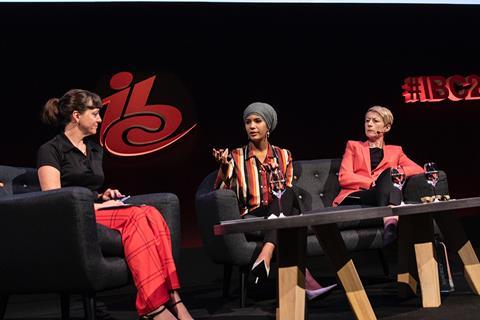 Both are fans of 360 degree filming and online story-telling. The Al Jazeera route has been to produce original factual programmes, within their ‘Contrast VR’ division, and focused on what Rasool described as the ‘global South’ and including stories ranging from life in a Jordanian refugee camp, the favelas of Rio and a desert oasis. Its latest production is ‘Oil in our Creeks’, examining the devastation caused by a 77-day oil spill in Nigeria.

Rasool, who worked at HuffPost’s immersive RYOT documentary team, explained that a traditional interview in 360 doesn’t work. “There has to be plenty to engage the viewer, and everything we do is designed to be viewed on a headset. It can be seen on social media, but our experience shows that its impact is much greater when on 360 where it tends to be watched for the whole length of the piece. Retention levels are very high on 360.”

“We constantly ask ourselves whether an idea is best suited for conventional video in terms of story-telling or 360/VR, but we are not about technology. We collaborate closely with the regular journalists at Al Jazeera, and while initially they were sceptical they now know that we are not a replacement for their efforts, but we can expand the story to a new audience.”

That new audience, mostly Gen Z, is also the target for Brave Bison, which unashamedly is addressing “half the world’s population who have grown up with social media,” said Claire Hungate, “and it’s growing.”

“Good content wins through,” she argued, but also explained that Brave Bison works with agencies such as the United Nations (on a dedicated project designed to inform viewers about sustainable living), or the Professional Golfers’ Association, oil company Shell, as well as the company’s own channels. “Provoking discussion and strategic innovation is important to us, and forms a key part of our advice to our clients.”

Brave Bison is a public company (quoted on the London AIM share market) that depends on a mix of revenue streams, from sponsorship, ad-revenues, e-commerce, Facebook-type monetisation and merchandising as well as dedicated briefs from the likes of Tencent in China. “We succeed because we know that behaviour can be changed through entertainment.”

Brave Bison has its own studio, Yellowstone, in Hoxton, London, and its overall success can be measured in part by the 13.5 billion views generated in the April-June quarter 2018.

“We work closely with our sponsors, of course, but we maintain editorial control. Our work is not a replacement for what they might be doing, but a means of expanding the story to new audiences. We target the 1-minute plus viewer. That’s where we gain some extra cash.”