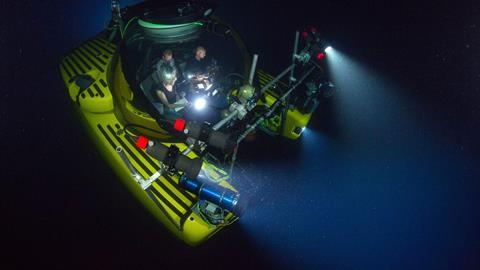 Making the grade: The post-production of Blue Planet 2

In the second part of IBC365’s special report on the making of the BBC’s Blue Planet 2, Will Strauss looks at the post-production work that was completed for the returning natural history series.

Blue Planet 2 uses breakthroughs in marine science and cutting-edge technology to explore new aquatic worlds and reveal the latest discoveries in and around the Earth’s oceans.

The follow-up to 2001’s original, it took four years to make and required 125 expeditions and 6,000 hours of diving underwater. But the hard work didn’t end once the cameras stopped rolling.

“Grading underwater footage is one of the hardest things a colourist can do,” says Blue Planet 2 colourist Adam Inglis, who graded the series at Bristol’s Films at 59.

“Colour, contrast and brightness are all highly variable depending on how much water you’re shooting through and its clarity and depth. And the deeper you go the less coloured light there is to work with: the first to go is red, then green and finally blue.” 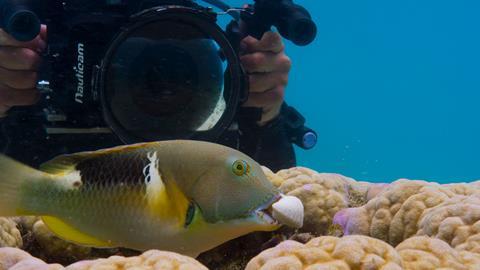 An orange dotted tuskfish on the Great Barrier Reef

Despite these challenges, the production team still wanted Blue Planet 2 to be much more than just, well, blue. As such, each episode has been given its own individual pallete that matches its subject matter.

The Deep, for example, features a lot of black while Reef is full of colour. At the same time, the whole series needed to feel both natural and vibrant.

Therefore, aside from the already difficult task of balancing out such variable material, Inglis and the grading team also had to squeeze as much colour out of the images as possible.

“There are a number of ways of doing this,” he says.

“You can remix the colour channels, adjusting specific colour hues, mixing between different grades within shots and so forth. You’d never really want to be working to match the worst quality shot in the sequence; ideally you’d get them to match the best ones.”

Inglis used Filmlight’s Baselight for the grade and was able to take his time, which really helped.

“I’d often grade a shot multiple different ways and compare the end results to see which approach was best,” he adds.

With the footage matched, and as much colour and light extracted as possible, the final task was to ensure that resulting pictures could comfortably tell the Blue Planet story. Inglis had a few things in his favour.

“The amount of information that modern cameras can capture even in such tough conditions is remarkable, but most importantly the footage itself was simply stunning,” he says.

“The quality of the camerawork and the beautiful and sometimes beautifully ugly animals themselves deserved the best treatment I could give them. While it may be difficult to work with images from such a strange world it is also hugely rewarding.”

The online for the series was completed by Films at 59’s Franz Ketterer and Wes Hibberd. They were tasked with beautifying the images, often on a shot-by-shot basis.

It was a task that was made more complicated by the filming conditions in which the pictures were acquired and the range of varying source material provided. This meant that an element of enhancement and restoration was required.

A bespoke workflow was designed for the job with Ultra High Definition (UHD) and High Dynamic Range (HDR) delivery, as well as HD Standard Dynamic Range (SDR), in mind.

The series was conformed and graded in Baselight within an ACES colour pipeline, and finished in Flame Premium. Digital Vision’s Phoenix film restoration application and Adobe’s After Effects were also used. 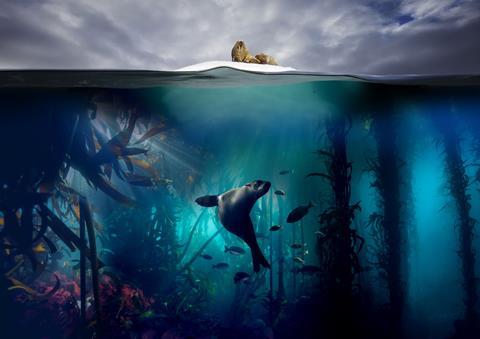 While viewers in the UK can see Blue Planet 2 in HD on their TV sets (and potentially in higher resolution formats via BBC iPlayer at some point in the future), the series itself is bound for a number of different destinations around the world - and will be viewed in a number of different ways.

As such, a huge number of deliverables were required. Again, this responsibility fell to Films at 59.

As well as the BBC transmitted version, the Bristol post house will deliver seven more in HD and two in UHD HDR. This is nine principal versions for each of the six programme: or 63 versions across the series in total. And then there are different sound deliverables too, for both stereo and 5.1.

Films at 59 post producer Miles Hall, the project manager on Blue Planet 2, says the extent of the deliverables means that the delivery processes need to be embedded in the whole post-production workflow from the outset, especially with “challenging” delivery deadlines in mind.

“Delivery deadlines are often different for each version,” he says. “So while the BBC TX version is the focus, this may be last to deliver with the Worldwide and DVD versions being needed first to allow for localisation and creation and distribution of the DVDs.”

To facilitate the delivery process, the constituent parts that make up each programme - the stings, titles, main body of the programme, presenter-less sections, calls to action, the ‘making of’ diary, credits and end boards - are all treated as separate elements.

Hall describes it as being a bit like a model kit.

“Each of the elements go through their individual post processes as required and they only come together on a single timeline for the final review and export for each version,” he says.

For the UHD HDR versions, Films at 59 is delivering both a 25fps Hybrid Log Gamma (HLG) series for BBC Worldwide and a 23.98fps PQ one for Blu-ray. The latter requires careful attention to the metadata tagging as this will impact on downstream distribution and how the final version is viewed.

All the versions then go through a Quality Control (QC) and file delivery process, with each taking a number of hours to complete.

Like the series itself, the post-production of Blue Planet 2, is no mean achievement.

“Resources are stretched further as editorial changes are made along the way,” adds Hall.

“These often need to be incorporated into files that have already been made and sometimes even delivered. Having a solid set of internal procedures to manage all these deliverables is essential if everything is to get where it needs to go and on time.”