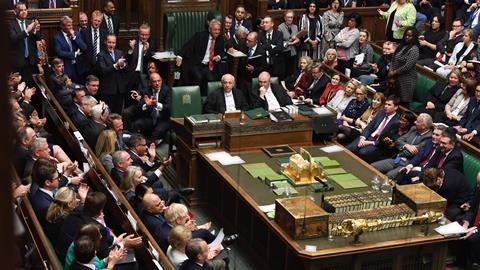 The live broadcast of the UK’s Parliament is proving increasingly popular with British viewers as debates over Brexit and legal challenges intensify. Adrian Pennington looks at how Parliament is broadcast. 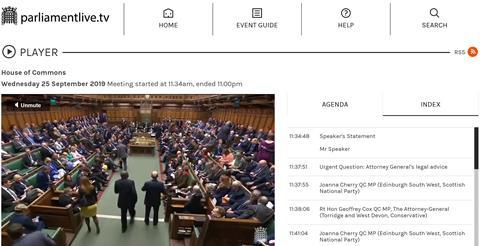 Parliamentlive.TV: Shows debate in the House of Commons, House of Lords and committees.

After heated debate in the Commons on Wednesday night, speaker John Bercow, who plays the part of on field referee, said the atmosphere in the Chamber was “worse than any I’ve known” and called it “toxic”.

Such drama is one of the reasons that Freeview channel 232 is suddenly the hottest button on the box.

BBC Parliament’s broadcast of proceedings from the House of Commons, House of Lords and various committees are usually only watched by a few 100,000 die hard political junkies but Brexit has sparked a ratings spike for the channel and its complementary website Parliamentlive.tv.

A number of video clips from the chamber have also gone viral, recorded by MPs in contravention of Parliament’s own rules.

A record audience of 2.6 million viewers tuned in during the week of 2-6 September peaking on Tuesday 3 September when 727,000 viewers (contributing to 1.5 million for the day) watched as more than a more than a dozen Tories defied their leader by voting in favour of seizing control of the Commons timetable.

That broke the record set earlier this year, when the week beginning January 14 drew 2.2 million viewers.

It is the element of unpredictability, the political point scoring and ticking clock of deadlines which has made recent broadcasts as appointment to view as a major league football or UFC wrestling match.

Politicians had refused cameras entry into Parliament for years, afraid of what the public would learn.

“My concern is for the good reputation of this House,” Prime Minister Margaret Thatcher told the Commons during a 1988 debate on the topic. In response, Labour MPs chanted “frit, frit, frit” (“frightened”)

Those fears have come to pass. BBC Parliament is either democracy laid bare or a reality TV car crash.

Peter Knowles, the BBC Parliament controller has a more nuanced view. “People like the idea that this quirky TV channel is showing this drama and that it’s something they have got in common,” he recently told BBC Radio 4’s Media Show. “People may hold extreme opposing views but love to find common ground in sharing their experience of watching it.”

Staying neutral
While news programmes and channels have long dipped into the feed from Westminster adding commentators, opinion and analysis, the Parliament channel has to tread a studiously neutral line.

Aside from Westminster it also covers proceedings from the Welsh and Northern Ireland Assemblies, the Scottish Parliament and the European parliament, and offers a continuous largely unmediated feed.

“There is constant mediation on screen with captions telling you who’s speaking and what they are talking about,” Knowles says. “At special moments (such as Black Rod’s ceremonial proroguing of Parliament) or in gaps in proceedings we do try and guide people.

“One or two of the audience maybe think they know it all - they’ve got Erskine May [treatise on parliamentary practice] costing a few hundred pounds sitting on their knee at home - but most are jolly grateful for guidance.” 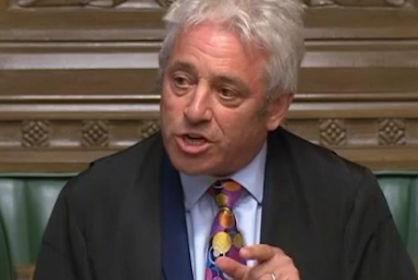 Knowles, a former managing editor of BBC TV News, has been with BBC Parliament since 2001.

He stresses: “We are absolutely squeaky clean as far as commentary [is concerned]. We have to be impartial through and through.”

The Commons sets strict rules for what can and cannot be shown.

“There used to be a lot more [restrictions]. Mercifully that list has reduced over the years. At the start of parliament broadcasts (in November 1989) what you got was a close-up of somebody speaking (with occasional wide shot) but you couldn’t see anything going on around them. There were no reaction shots (of MPs listening).”

Parliament since relaxed its stance on that and more recent changes have helped give audiences a far greater sense of being there, he says.

“Eye level cameras next to the speaker’s chair have transformed things so you can see when the tellers approach you or see the PM on his feet opposite the leader of the opposition. It’s much, much closer to a feeling of being there.”

Nonetheless, when the session officially ends so too must the channel’s live coverage. “It goes to a colour picture of a clock,” is how Knowles describes the end of session place holder.

That’s tricky, because often the action continues on the green seats and spills out into the lobby, where his cameras can’t go.

For example, immediately after parliament was prorogued the SNP filmed a group of Plaid Cymru MPs singing Calon Lan and posted it on social media.

“It wasn’t part of the feed,” says Knowles. “It does raise the interesting and difficult question which is why do the MPs – who have set the rules – go off and break them?”

Parliamentary rules
The immediate change [we want] is that if an MP or the PM themselves brings in a guest - which may be another country’s PM - into the viewing gallery and the MPs are clapping and pointing and talking about them, the audience cannot see it. It’s not filmed and that is a real frustration.

“The bigger question is whether we can get some glimpse of the voting lobbies. At the moment the only chance we get is if MPs tweet a picture out. But we can’t see them.”

Protesters in the public gallery are not allowed to be shown either.

“That’s common practice across all parliaments so as not to give much attention to protestors. That said the Scottish parliament might give you one shot, briefly. So there’s a balance they are striking between openness and being seen to encourage troubled behaviour in the house.”

Photos from the voting lobbies are banned – but Speaker Bercow has not wrapped any knuckles.

The ability for MPs to reach their constituents or wider audiences online, even by clipping Parliament channel coverage, is a significant development.

Video of Sikh Labour MP Tanmanjeet Singh Dhesi demanding that Boris Johnson apologise for controversial comments he made about the appearance of Muslim women has been viewed over 2.5 million times on Twitter.

MPs are well practiced at creating a sound bite targeting TV bulletins but the more media savvy MPs (or their teams) are now versed in making montages to share online. The PM or leader of the opposition will have a ready-made question or quote to publish instantly on their Facebook page or Twitter feed to target their electorate.

Even before the cameras were allowed into Chamber, then Prime Minister Thatcher was taking advice on where to look, how to stand, to convey her arguments not to the sitting MPs but to the televisual audience.

MP’s behaviour continues to be modified and amplified by social media. It’s unlikely we will catch Jacob Rees Mogg or anyone else reclining in quite the decadent way he was snapped doing.

The Prime Minister has even begun arranging curated Q&As with the public on Facebook Live – literally putting into practice the narrative of a government speaking direct to voters over the heads of parliament.

One side effect of the heated debates has been a growing fanbase on gaming platform Twitch. The site streams the UKparliament channel to 200,000 viewers on the Thursday PM I checked and has attracted almost 27,000 followers.

One reason given is the real-time chat interaction which the Twitch platform offers to participants alongside the live feed. Viewers can pepper their contributions with emotes (Twitch’s terms for emoji’s) of Johnson, Corbyn and the Speaker.

Broadcasting and streaming
Although Parliamentary proceedings have been broadcast since 1989, the BBC only took over the channel and its production in in 1998. Bow Tie Television’s involvement with the broadcasts began in 1989 and it’s been the principal contractor since 2001, according to the company’s website.

It supplies multi-camera coverage of Chambers and Committees, operating over 170 camera channels concurrently to deliver over 7,000 hours of manned unscripted content each year. Now part of the NEP Group, Bow Tie’s staff operate mic switching and sound mixing across 50 room set ups using over 1250 microphones every day, providing the sound reinforcement in meeting rooms for all capture and relay. The teams produce the broadcast output, both directing and producing content and adding metadata markers to facilitate search and discovery.

On the Parliamentary website there are sometimes up to 20 live streams of Select Committees available (operated by Bow Tie).

“Is it possible to imagine that using the latest digital technology the BBC could do for Parliamentary coverage what they have done for the Olympics or Wimbledon? As Tony Hall himself told the Select Committee: “could we work with the parliamentary website to allow people to search more easily by topic, to have notifications when things are being brought up in the House?’”

BBC Parliament annual content budget is £1.6m and its transmission costs are reportedly around £7m, a cost that could be slashed if the channel went totally OTT although given the massive public service remit this is not likely soon.