IoT and broadcasting: from standards to storytelling

The Internet of Things (IoT) holds enormous potential for many aspects of broadcasting, but only if standards can be agreed.

Commonly shared numbers for the scale of the IoT point to as many as 50bn devices connected to the internet by 2020. While this figure is impressive, it doesn’t tell the full story of the implications for industries such as broadcast and media.

Content production, distribution, management and consumption will all be impacted by the IoT. But the IoT is about standards, and those standards do not yet exist (see box below).

As an example of how huge this issue is, in March this year the governments of Germany and Japan agreed to coordinate efforts for the setting for global IOT standards.

While the discussions and debates on standards continue, just how will the IoT change broadcast?

Consumer and customer demands are one of the main influences in the future of television and the IoT has the potential to disrupt how many hours of content are watched, the time it is viewed and the device that is used to view it. All of this has obvious implications for the monetisation of content.

A report by consultancy firm EY (formerly Ernst and Young) sets out six IoT trends that will have an impact on television:

1. Storytelling will evolve to make better use of an omniplatform environment, with television programmes reformatted for smaller screens and accompanied by appropriate marketing

2. Ubiquitous content on multiple screens will become more mobile in homes, vehicles and public spaces. The use of sensors, location devices and 5G will determine the optimization of the customer experience in a new connected lifestyle

3. Social dynamics and synergistic experiences will be offered based on social events occurring while specific television programmes or events are being experienced

4. Innovation in programme discovery and television controls will drive new techniques which are similar to search engine optimisation based on television ‘content discovery optimisation’. This practice focuses on continuously providing content to the broadest audience at the appropriate time

5. Binging will drive more innovation in measurement and personalisation Netflix and Amazon as distribution partners. Using data analytics, companies can then package the right experiences for advertisers and monetise them directly to the different types of viewers

6. New entrants are demanding unique content that will drive innovation beyond the traditional studio system as there is a competition between traditional content companies, distributors and new technology companies for control of the viewing experience

“Several barriers have the potential to slow the development of IoT. The three largest are the deployment of IPv6, power for sensors, and agreement on standards” - The IET

According to Deloitte, IoT has the potential value for business beyond operational cost savings.

For broadcasters, it provides the ability to gather data in real time which could be transformative. Allied to this is the impending launch of 5G mobile networks which promise higher speeds, lower latency and support for IoT devices and sensors.

Another view on the easing of data barriers is offered by Accenture which says an increased demand for consumer entertainment and advertising emerges through connected living but that more and more competition will emerge as additional capacity brings more players into broadcast ecosystem.

“We believe that success will depend on increasing revenues and controlling costs through balanced investments in content, developing innovative approaches to monetizing existing assets, establishing a content-centric operating model that supports flexibility at low cost and optimizing the consumer experience,” it said. 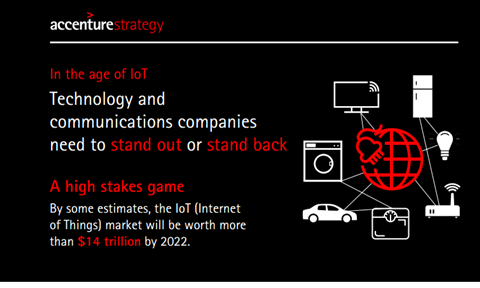 In terms of user experience the potential for how this can change in the home is already being mapped out.

In the home IoT will soon change the entertainment and the broadcasting industry with multiple devices automatically performing tasks whilst the user is preoccupied. For example, to prevent content being missed, a connected TV might automatically pause when it detects an incoming phone call or a doorbell ring.

Sensor-activated devices might alter the environment of the room depending on the content being consumed to create a multi-sensory experience. This could be a vibrating chair or audio and lighting adjustments to create appropriate atmosphere.

A smart television could be used to manage any smart device in any part of the household, such as oven or lights in certain rooms.

IoT deployed at sports venues will be able to generate data which could then be delivered via the smart TV based on customer preferences. 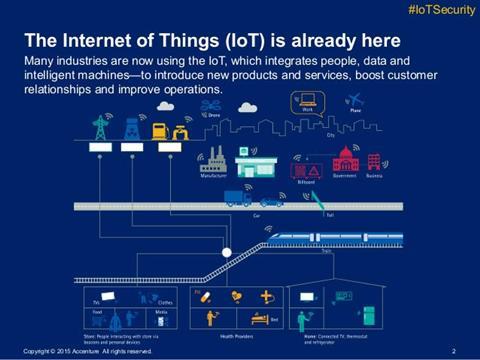 Personalisation is an important factor of entertainment and the TV ecosystem can be structured in accordance with the user’s profile.

The data is based on demographic, location and behavioural information in order to provide personalised content to multiple screen devices.

The emergence of Multiple System Operators (MSOs) in households in collaboration in cable, telco and satellite providers will see existing devices such as remote controls extend their reach over Wi-Fi and multi-service residential gateways.

Cisco forecasts over 50 billion devices will connect to IoT by the year 2020 and as a result redefine the way broadcast companies work and provide content to consumers.

Networks in the media and entertainment vertical would increase by 120%, companies in the entertainment and media are predicted to up their IoT spending by 54% in 2018 over $72.6 million.

While the potential is undisputed. It will require communication, networking and security standards.

The Internet of Things: definitions and standards

The IEEE has created a “living document” that aims to provide a “baseline definition of IoT in the context of applications that range from small, localized systems constrained to a specific location, to a large global system that is geographically distributed and composed of complex sub-systems. The comprehensive, 86-page document can be viewed here.

SMPTE ST 2071 is a suite of standards published by the Society of Motion Picture and Television Engineers (SMPTE) that define a framework, protocol, and method of service discovery for the control of objects.

In October 2016, SCTE formed an IoT standards working group with the remit of facilitating communication between service providers and industry partners to standardise IoT-based services and a focus on making standards and operational practices deployable and manageable for service providers.

The European Telecommunications Standards Institute (ETSI) has also published a list of its IoT standards, which is available here.