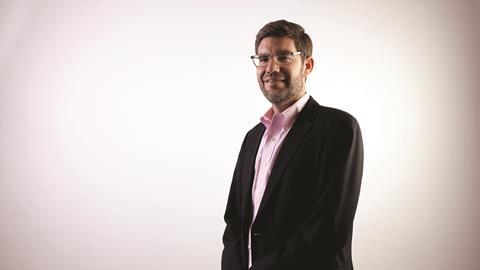 Vice Media is on an aggressive expansion path, looking to launch in 50 markets around the world; and it’s not just focusing on mobile and online programming – linear TV is a key part of the offering.

Vice Media is on a growth trajectory, with the ambition to be the world’s leading youth media company. It is striking a path that has gone far beyond its roots, now encompassing both a linear TV channel called Viceland as well as mobile and online programming, and creative production services.

In the USA, Vice now produces a segment for HBO, while in Central and Eastern Europe it has struck a massive deal with Greek TV company Antenna, to roll out its programming and new linear TV channel to a dozen markets, including Serbia and Greece.

“We’re not becoming a TV company,” states Vice Media’s James Rosenstock, “We think it will be an important part of the company, and we are looking to get the Viceland TV channel distributed into over 100 million homes over the next year or two.  Our experience in North America so far has proven that really growing the brand and getting people into our overall ecosystem is the key.”

Founded in Montreal, but based in New York City for the past 15 years, Vice is on a roll to launch in more than 50 markets around the world. In the next 18 months, it aims to bring the reach of its digital and TV channel from 30 markets today to more than 80.

In the UK, Vice has a deal with Sky for both Viceland TV and for its on-demand programming offered through the  Sky Q set top box. In France, it has struck a deal with Canal+ for its Viceland channel, and at least a dozen other markets in Europe – as well as Russia – will see a Viceland channel launch over the next 15 months.

The international rollout is being spearheaded by Rosenstock, a former Discovery executive who joined Vice Media as Executive Vice President, International and Chief Corporate Development Officer, a little over a year ago. At that time Vice already had a deal with Rogers of Canada to help it ‘scale up’ in its home market. During the two years since, its Canadian revenues have quintupled.

The deal with Rogers provided a good roadmap and Rosenstock has used the partnership approach to expand Vice’s reach beyond North America. Building on a deal with Antenna, originally instigated by Vice founder Shane Smith, Vice is taking advantage of the Greek broadcaster’s regional footprint, cross-promotional and distribution capabilities across a wide range of Central and Eastern European markets.  Antenna was thrilled to add Vice programming to its services because it was able to attract the ‘Gen Y’ audience reach that it had lacked. “This is a very impactful deal for our company,” says Rosenstock. 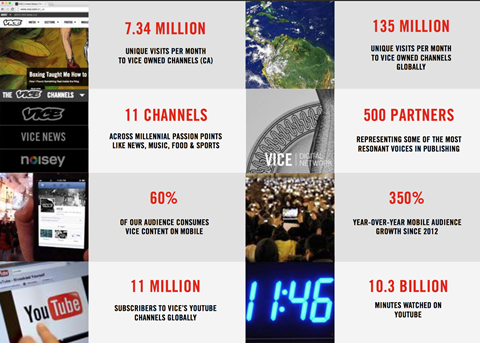 So why does a company that started in print and transitioned fully into digital, now want to launch linear TV channels?

“What we are really doing by introducing TV to our digital and creative services agency and our other businesses that exist already is to really accelerate the brand-building and as a way to produce premium local content,” says Rosenstock. “The most important thing we focus on is localising in the right way, so in some markets we have good strong local teams. Now with linear TV in the equation we are able to produce more premium video, so I think it’s about localising the whole offer in the right way.”

Rosenstock believes that Vice’s USP is that it understands its young audience, produces all its own content and is looking to monetise it through multiple windows.

“If I look at Vice, we are developing, and are well advanced frankly, as one of the most distributed, international media companies that will exist. If you look at Fox and Discovery they are very international, but most of the other media companies are not. Netflix is still very early on in their journey and they are going about it a little bit differently. We are trying to figure out TV, while everyone else is trying to figure out digital – and that is an interesting place to be.” 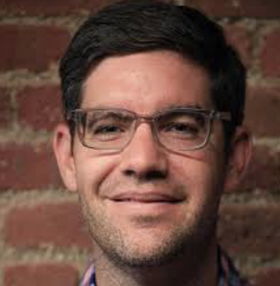 James (“Jay”) Rosenstock is Executive Vice President, International and Chief Corporate Development Officer of VICE. In these roles, Rosenstock is primarily responsible for VICE’s international expansion. Since joining VICE in 2015, Rosenstock has overseen the expansion of VICE into India, the Middle East and Southeast Asia (among other markets) and the launch of VICE’s “VICELAND” TV network in 50+ international markets.

Prior to joining VICE, Rosenstock was Executive Vice President, Corporate Development at Discovery Communications where he oversaw $3+ billion of international M&A, including transformative acquisitions such as Eurosport. Rosenstock was previously an executive at Sony, where he worked across the company’s entertainment and electronics businesses. Rosenstock began his career as a media and entertainment investment banker – most recently at Credit Suisse.

Rosenstock is an honors graduate of Virginia Tech and is active with the Special Olympics of New York.