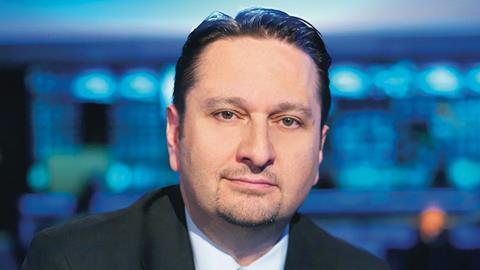 The Middle East and North Africa (MENA) have always been a focal point for international news, but only recently have news outlets in the region grown into major global players with an international reach.

Nart Bouran, who participated in the IBC2016 Leaders’ Summit, has been involved in the MENA news scene from the beginning. In 2012, he helped Sky News Arabia get off the ground and has been at the centre of the growing MENA broadcast industry.

“I was employee number three at the company, after the HR director and a driver,” he says. “It was a great, great challenge, but a lot of fun. It was a very exciting time.

“The discrepancy is very wide between the haves and the have nots, and it’s a big challenge”

“With Sky News Arabia we were always aware that whatever we did, it had to be something new. It had to be different from everything else around.

”Because we were new, we were able to build it all from the ground up with a multi-platform mentality, so we had an advantage over some of the more established broadcasters in the region.”

Broadcasting in the MENA region presents its own set of challenges and opportunities. There is huge diversity among a rapidly growing audience with the majority of the population below the age of 25.

“It’s a unique area,” agrees Bouran. “You have some of the highest engagement of digital and social media platforms in the world, yet there are still a lot of people who are not even connected to the internet.”

In a technology-driven business, this diversity of audience makes the job all the more delicate.

“Media organisations in MENA might be testing augmented reality or Ultra HD, yet you have a large number of people who are still watching TV in 4:3.

“The discrepancy is very wide between the haves and the have nots, and it’s a big challenge,” he says.

“You want to try new platforms and do things in a different way, yet you need to also be aware that a lot of people are still more in tune with linear TV.”

Like all broadcasters around the world, Sky News Arabia is faced with disruptive innovation – new technologies, apps and audience behaviours challenging its business model and forcing it in new directions.

Knowing which disruptive innovations to chase, and which to let go, is more an art than a science.

“Over the next few years, linear TV will remain important in the region,” Bouran predicts. “However, we’ll be bringing in the digital component with OTT, smart TV apps and advanced set top boxes, and these technologies will allow us to address a lot of these disruptive challenges.

”How we use OTT and smart TV will be the thing that allows us to flex our muscles with new technology, without disenfranchising viewers.” 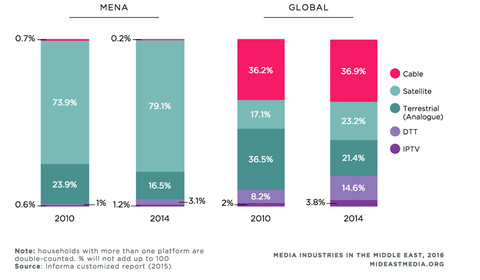 But with news outlets able to reach anywhere in the world now, do broadcasters like Sky News Arabia find themselves having to compete against other more established global broadcasters?

“We’re very language specific,” says Bouran. “That makes it more challenging, but it also gives you an advantage because you’re really only competing with people who produce content in your own language.

”Still, we do look at other geographies to see what they’re doing and we try to use some of their principles and apply them to the Arabic region. We’re constantly learning.”