The Berlin Philharmonic orchestra will be available in Ultra HD and HDR from next month, using new video facilities to capture weekly performances in the highest possible audio and video quality.

The idea is “to preserve our artistic work in the best possible quality,” said Robert Zimmermann, Managing Director, Berlin Phil Media, and to reach a new audience.

Berlin Phil Media installed the new system over the summer, and has already started using it for HD broadcasts; however it will shoot in UHD, with standard dynamic range, early October and will move to HDR later in the month. Initially the UHD recordings will be for archive only, with live online broadcasts in HD, but it will start streaming live UHD next summer. Berlin Phil Media produces a concert every week for its own digital channel. 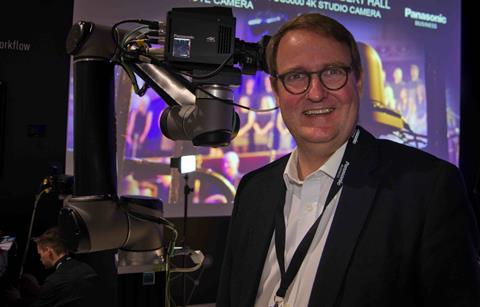 The new video facilities include eight Panasonic AK-UB300 remote box cameras, and one UC3000 studio camera. The single-sensor UHD cameras work with 2/3-inch B4 lenses without needing an adaptor. Berlin Phil Media only uses the UC3000 if it needs a camera operator to cover a soloist, or performers who are not normally part of the orchestra – or occasionally where there hasn’t been enough time to program a particular concert into the remote system.

“The eight cameras are operated by one person,” he added. It has also bought seven Fujinon 22x 4K lenses, and two longer Canon lenses for telephoto shots.

Berlin Phil Media uses the cameras with a Panasonic AV-HS6000 switcher, but will replace this with the newly launched HS7300 model next year (during the orchestra’s summer break).

“There is no existing standard for HDR. All the monitors and camera signals can look different.”

“We built a hybrid studio: HD/SDR and UHD/HDR, since we have to produce both formats at the same time, which is quite difficult,” said Robert Trebus, Panasonic’s manager project sales (Germany, Austria and Switzerland). It couldn’t be done with a second control room, as there wasn’t the space. We had to look for background automatic parallel production, and the user interface has to control both.”

Fortunately, the UC3000 and UB3000 cameras both have parallel signal processing engines in the cameras, with two outputs. In the control room, the HS6000 HD mixer is used to create the HD programme and communicates with a 288x288 Utah SDI/fibre router which handles both HD and UHD signals. “It does a kind of virtual switching in the router,” said Trebus.

“We have to make sure there is no latency or delay. You have to follow the conductor, even in the switcher,” he added.

The Philharmonic is currently being output with stereo sound, but is moving to 5.1 soon.

“Recording classical music in a concert hall is actually the worst thing, because you don’t have light, and you don’t want to disturb the orchestra or the audience, so you have to be invisible and silent,” explained Zimmermann

“It is important for us that the fan, pan/tilt head and camera make absolutely no noise,” and the models they picked “was the only combination we could find that offered this,” he added.

The box cameras are mounted on Vinten-Radamec Fusion FH35 pan/tilt heads, chosen because the UB300 with lens is just slightly too heavy for the Vantage head.

“We had to make sure the wiring on the back is noiseless,” added Trebus. This has meant using different cabling material, including woollen protection where the cables might rub together.

They have also had to switch off all the little LEDs on the camera and head (for power or IP control, etc), or cover them, as nothing could be visible that might distract the performers or audience.

“In a concert hall you always have problems with lighting,” said Trebus. The lights shouldn’t be too bright, and you need to beware overheating delicate musical instruments.

They are currently looking at how best to reposition lights, to make the most of what they have got for HDR. Given the extended colour range of BT2020, there is an opportunity to enhance the look by picking out colours (such as the glint of metals) and making it more realistic, without distracting the performers.

The other big problem with HDR is delivery. How do you ensure that what you see in the concert hall is what consumers can view on their televisions at home?

“There is no existing standard for HDR. All the monitors and camera signals can look different,” said Trebus. However, in this Panasonic saw an opportunity, and its consumer displays division worked with its broadcast team and the Philharmonic to make sure the content looks the same at home as on stage.

The Digital Concert Hall content management and monetisation platform has a web-driven front end, delivered via IP stream. “With HD, this is well established, but with 4K HDR streaming we had to make sure that customers could view in the same quality,” he said.

There has been a lot of testing and fine tuning of the H.265-encoded IP to create a robust HDR workflow. “We had to make sure it looked exactly the same in HD in the control room as in the concert hall, and then it had to look the same in the home.”

The result is now perfect – at least with Panasonic sets. “We followed what we believe will be standard in future,” said Trebus. Besides, Panasonic has done a multi-year deal with the Philharmonic to ensure its domestic customers get exclusive access to each HDR concert for the first 120 days, before it is offered to everyone.