Building a production setup for under €20,000

IBC2017: A self-shooting ’one-man band’ set himself the challenge to re-equip his video production kit with the latest equipment for less than €20,000. 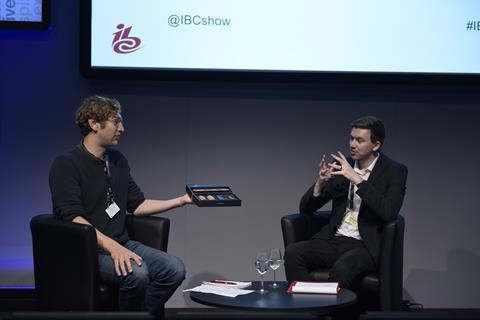 What Caught My Eye session curated by Tom Marshall (right)

George MacCallum, who shoots and edits branded, social content, documentaries and music videos, says he succeeded, and even found kit that was better, lighter, more robust and versatile than his current equipment.

Speaking during the popular What Caught My Eye session, MacCullum praised Sony’s A9 camera saying it could be an “excellent upgrade with a good battery, two SD slots, and just €5400 for the body.”

He also picked the Canon E0S C200 camera, capable of RAW 4K, a touch-screen, face-following auto-focus “and very easy menu for self-shooters” at €6899.

Panasonic’s EVA-1 was also impressive and from the Varicam design team, extremely light-weight (at just 1.2 kgs for the body) and potentially very useful for Drone use. €7250.

As far as accessories were concerned, he loved the Shoulderpod made by a Barcelona-based business with a strong design ethic, and able to turn a smart-phone into a production rig. “This could appeal to broadcasters and news journalists all over the world.” The kit was priced at between €40-€120.

He also enthused over Force Servo’s Pointer Gimbel [Hall 8, B28] which was “really cool” with space to add other accessories. “It isn’t cheap (at €5000) but has so many applications, even for flying on kites, as well as vehicles.”

Waterbird Systems’ Multi-Slider [Hall 11, B12] also caught his interest because of its adaptability, and allowed configuration into any number of shapes, and was App-driven allowing for time-lapses and variable speed transitions. €5000.