The Rory Peck Awards recognise the achievements of freelancers working behind the camera in news and current affairs, with those responsible for reports from Syria, Iraq and Myanmar honoured at last night’s ceremony. 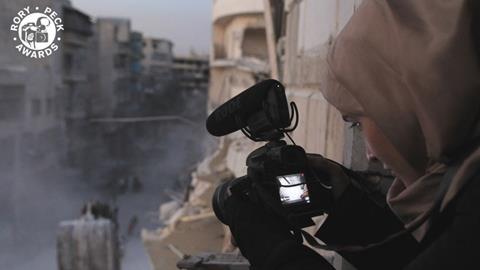 Syrian camerawoman Waad Al Kateab was presented with the Rory Peck Award for News for her Channel 4 report Inside Aleppo: The last Hospital. Judges said her report was “an exemplary piece of journalism.

“Not one shot is fired yet Kateab shows us so powerfully the horrors of war.”

Filmed in Al-Quds hospital in November 2016, it captures the daily horrors for civilians and families trapped in the city’s diminishing enclave. Kateab provides a rare glimpse into the atrocities of rebel-held east Aleppo and the trauma caused for thousands of families.

Accepting the award in darkness, due to the concern for her personal safety, Kateab said: “Life under siege had a different meaning. Our only concern was to make sure our story was told. This award is dedicated to all Syrian journalists who risk their lives to show the world what is happening”.

Kateab is a self-taught citizen journalist trained by NGOs. She has worked for Orient TV, Al Arabiya and regularly contributes to Channel 4 News, her reports have become the most-watched pieces on the channel, and she has amassed more than 400 million views worldwide.

Google Head of Strategic Relationships, News and Publishers, Bendicte Autret said: “This year’s finalists for the Rory Peck Award for News have all produced incredible work exposing the atrocities of warfare from Iraq and Syria.

”We’re proud to be able to support them and the invaluable role that freelance video journalists across the world play in providing fast, accurate information to people on important issues.” 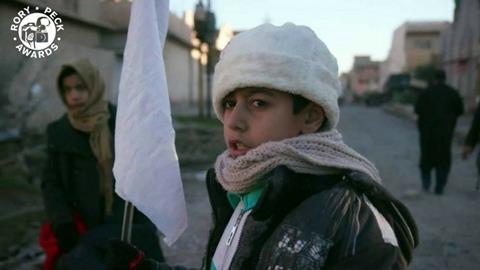 The Rory Peck Award for News Features was won by freelance French cameraman and filmmaker Olivier Sarbil for his report on the Battle of Mosul. Immersing himself on the frontline in Mosul, Sarbil spent six weeks following a group of young soldiers from the 1st Battalion.

Channel 4 brodcast the report which was described as an intimate, unvarnished portrait of the slow and grinding battle to free the people of Mosul.

Judges said: “Olivier bring us incredible footage and intimate insights into real life Mosul as it’s prised from the grip of IS. He captured it all.”

Sarbil is based in London and has focused on the battle of Mosul, following an Iraqi Special Forces squad tasked with rooting out ISIS. 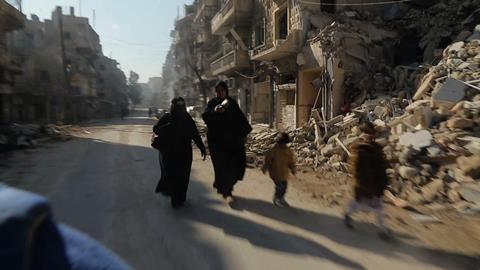 Judges described the documentary as intimate, gripping and moving, they said: “It is like a love story, a love diary, to their city. A superb, a tremendous film.”

Sony Professional Solutions Head of Media Solutions Richard Scott presented the award. He said: “2017 has been another unforgettable year for news and current affairs reporting. This year’s Sony Impact finalists have all brought their own unique perspectives to international events, yet all three films are united by the power of their images and their ability to move us.”

Accepting the award on behalf of the winners, BBC Arabic spokesperson said: “The film documents a deeply personal account as their city of east Aleppo fell. They told this story because they felt it was bigger than them.”

This film captures the immediacy of events through the personal insights of the four young cameramen. Siraj Al Deen Al Omar, Ahmad Hashisho, Basim Ayyoubi are all 24 years old and were born in Aleppo, Mojahed Abo Al Jood is 22 years old. Having fled their hometown they were unable to attend the awards due to the risk to their personal safety. 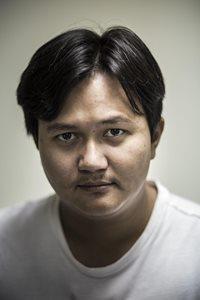 Burmese photographer Minzayar Oo was awarded the Martin Adler Prize in recognition for his work in Myanmar. Upon accepting the award Oo said: “I am extremely lucky to be here, one week ago I was still detained in a Bangladesh prison”.

Judges said: “Notably his long-term commitment to covering the plight of the Rohingya - a story now top of the international news agenda.”

Recognised for his contribution to newsgathering, Oo is the first photographer to win the award, leading the documentation of the political, social and economic transition in Mynamar.

She continued: “These awards are all about freelancers and the powerful work that they produce. But as we celebrate their achievements we are also aware that the challenges they face are changing, growing, and coming from new sources.

”After 22 years, the mission of the Rory Peck Trust remains the same: to support freelance journalists through these challenges, and help them to become stronger and more resilient.”