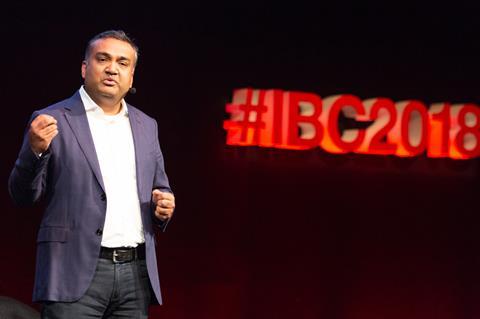 Speaking during Friday’s Visionary Keynote, Neal Mohan, Chief Product Officer of YouTube, said that the directive was “anti creator” and “sent out the wrong message”.

“I’m disappointed and upset about the ruling but we have yet to see how it will be implemented. But it will impact the creative ecosystem,” he warned.

“At YouTube we already take content seriously from the outset. We’ve found that in 90% of cases where a claim has been identified the owner leaves the content up there and monetises it.”

Mohan’s comments on the Directive were framed around the success that the social network has enjoyed in EU territories in recent years.

“While it is our mission to give everyone a voice and show them the world, it’s never been about anything goes.” Neil Mohan, YouTube

Mohan revealed that the number of YouTube channels making six figures or more in revenue in the EU is up 35% over the last year while the time that consumers have spent watching YouTube on their TV screens in the EU has grown 45%.

Mohan announced at the session that YouTube has also rolled its YouTube Kids proposition into two more territories - Italy and Portugal - and it has just strengthened its parental controls, allowing parents to handpick every video or channel their child is allowed to view.

Asked whether YouTube was doing enough to protect users young and older against fake news and extremist content, Mohan said that it was an area that he personally works very close on.

He said that YouTube owner Google was using Machine Learning as well as employing over 10,000 human evaluators to identify and pull down offensive images.

Following these measures he said this has seen the percentage of violent or extreme images being pulled increase from 8% to 50%.

“While it is our mission to give everyone a voice and show them the world, it’s never been about anything goes,” he said.

Read more from IBC2018 Weighing up the impact of Brexit