IBC2018: Broadcast infrastructure firm says trial is an opportunity for TV companies to experiment with the technology.

Arqiva has teamed up with music blockchain start up JAAK to pilot a decentralised TV rights database set to launch during the second half of 2019. 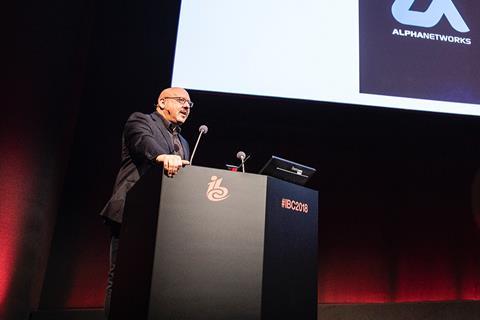 He told delegates that it was the perfect opportunity for TV companies to get involved in experimenting with the distributed ledger technology to maximise returns on their content investments.

“Everyone in the video industry is spending more and more on original rights – so once you’ve shown a property as a first run on your own network you want to be able to maximise the rights to property globally,” Moreno said.

“In the past people may have overlooked some of these lower value deals as they chased the main syndication deals at shows like MIPCOM. But now they need to maximise their returns – and a decentralised rights database can help them do this online in an automated way.”

Last year London-based tech company JAAK set up a similar pilot, KORD, in the music industry, which is already some way down the line in experimenting with blockchain in the hope that it will simplify the labyrinthine maze of royalties and rights it needs to navigate on a daily basis. Pilot participants included BMG, Warner Music Group and Global Music Rights.

Moreno said that the TV pilot would initially cap its participants to ten companies and each company will be required to make a small payment and offer up some of its content for the database.

The scheme is still seeking participants, and they don’t need to demonstrate any previous association to Arqiva to take part.

In an earlier session on Blockchain, television technology innovator Seth Shapiro - who helped bring Tivo to the US market – said that broadcasters would be wise to start slowly experimenting with blockchain technology rather than ignoring it altogether or going head first into embracing the whole ecosystem.

While his blockchain OTT platform Alpha Networks is looking to partner up with broadcasters, Shapiro added that he’s not expecting them to hand over their entire catalogue.

“They need to look at the advantages of what the blockchain can offer them in terms of data and IP and work together with companies on a non exclusive basis. TV companies are never going to throw all their content on a new platform, but they would do well to look for small trials.”

Read more Tapping into the power of blockchain