Enforcing accountability: How the industry can benefit from blockchain

The digital transformation of the media and entertainment (M&E) industry has resulted in dynamic and evolving ecosystems that have become increasingly complex and have introduced new challenges in the area of digital rights, advertising and digital fraud, writes IBM Global Leader Telecommunications, Media & Entertainment Rob van den Dam.

Blockchain technology can help address these challenges. It has the potential to better manage media assets – such as copyrights or advertising inventories - and to lower costs and ad fraud. 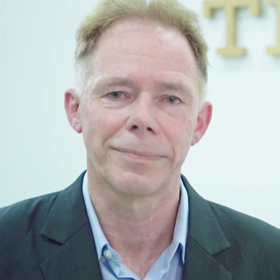 Although blockchain is clearly a potential game changer, only 21 percent of the 147 M&E C-suite executives we interviewed stated that they are already exploring blockchain. Indeed, the M&E industry is a slow mover compared to many other industries (see Figure 1).

Twenty-eight percent of the interviewees said they expect blockchain to help them by improving the transparency in media supply chains. This could, for example, decrease copyright infringements in music streaming. Publishers and songwriters are regularly accusing music streaming providers of not paying all they are entitled to, missing as much as 25 percent of streaming royalties. Spotify, for instance, has been sued in several cases for amounts up to USD 1.6 billion.

Thirty percent of the interviewees expect blockchain to help eliminate superfluous intermediaries. And 29 percent said blockchain technology could support them by improving security against fraud. Digital ad fraud, such as through bot networks and domain spoofing, remains a top concern for advertisers and publishers. In the first quarter of 2018, for example, mobile app marketers were exposed to over USD 700 million in ad fraud. 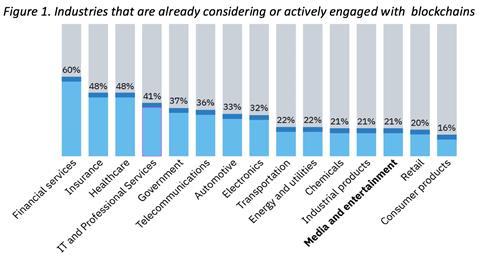 We see the greatest impact for blockchain in:

Improving processes in the media supply chain
With the digitisation of the M&E industry, the traditional media supply chains transitioned into complex ecosystems with many new players. This new environment has introduced challenges in transparency, efficiency, performance, trust, quality control and security. For content creators, for example, it has become very difficult to see whether the royalties are fairly settled. And in advertising a much smaller part of the available ad budget ultimately reaches the intended media outlet.

Brands and advertisers increasingly demand better transparency, performance measurements and accountability in the digital ecosystem. Recently, Procter & Gamble and Unilever decided to re-evaluate their budgets for digital advertising due to lack of visibility on the effectiveness of current ad spending.

Blockchain technology can provide greater financial and supply chain transparency in programmatic advertising. Unilever has started a pilot program that tracks the digital ad buying ecosystem via blockchain. The project has already begun to bear fruit by identifying discrepancies along the media supply chain while a campaign is in action. Running historical ad data through the system, the company found discrepancies immediately, rather than having to wait the duration of a campaign.

Now, the blockchain finds discrepancies daily, which Unilever demands to be fixed before an ad buy can go through.

These players exchange different kinds of information, such as media plans, target audiences, number of impressions and relative cost. Though blockchain’s shared ledger, each player has access to information relevant to its particular business (for example, an advertiser sees campaign results across different publishers, a publisher sees results of its inventory delivered to different advertisers or agencies).

The application of blockchain for impression traceability lays the foundation for performance-based pricing. This improves the performance of advertising campaigns through a system of incentives enforced by smart contracts. The main idea is to price impressions almost in real time based on the effectiveness they are delivering against a specific campaign. This capability generates higher return on the advertising investment and allows publishers to optimise the revenues of each impression.

Campaign delivery can be further optimised by leveraging the synergies of blockchain and artificial intelligence (AI). In this approach, blockchains are used to capture data related to the identity and charges by each vendor at the impression-level, while AI ranks the delivery paths that align best with desired campaign outcomes and shift budgets to those methods that optimise ROI.

Currently, only a 38-46 percent of each advertising dollar spend ultimately reaches the intended media outlet. This is in particular due to the large internet players who dominate the digital advertising industry.

Specifically, Google and Facebook form a duopoly that accounted for 73 percent of the U.S. digital advertising market last year. These platforms have an unparalleled ability to target users on a variety of devices, but have also built walled gardens that hold non-transparent media supply chains and closed measurement systems.

Publishers and, in particular, advertisers are increasingly pushing for transformation of the advertising supply chain because of dissatisfaction with the current situation. Banding together they can develop alternative digital advertising platforms that uses blockchain as a blind trust to do audience sharing and to let the advertisers decide how to spend their ad dollars across the participants. One of initiatives for such a blockchain-backed peer-to-peer network is AdLedger.

In this approach, blockchain offers the ability to encrypt data that machines can “see” and optimise across, while contributors have access only to what they are permitted to view. The result is that a broad ecosystem of advertisers, publishers and third-party data contributors have gained the performance outcomes of a walled garden without the need to share data that could be used to poach customers. This approach could provide the performance outside the control of dominant intermediaries, which currently impose both burdens and control in exchange for that performance.

Blockchain technology has the potential to change the way M&E companies transact with their partners and execute core business processes.

Read more You can download the full report here.