Pushing the envelope of film editing

Since making the leap from TV to film for a co-editing role on Scott Pilgrim vs. the World, Paul Machliss, ACE has perhaps become best known for his long-time collaboration with the film’s director, Edgar Wright.

“With every film he tries to challenge what’s possible in cinema and in editorial too,” Machliss told The Hollywood Reporter Tech Editor Carolyn Giardina, in conversation on the IBC Conference stage. “Everything we did with Baby Driver [in terms of synchronising action to music], we tried to take one step further on Last Night in Soho.” 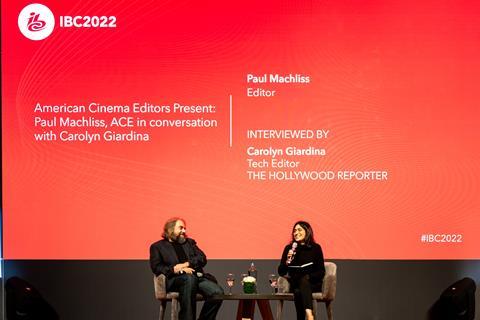 Machliss: ’Producers are never not going to work in this way again’

Machliss went on to share candid stories of how some of his projects came together from a production and editing perspective, and described how his setup has over the years has evolved from being relatively primitive, to way ahead of the curve.

His approach to editing had a major impact during the shooting of Baby Driver and resulted in the design of a portable edit system which allowed him complete freedom to locate himself anywhere on the film set, and to give Wright instantaneous editorial feedback on a shot-by-shot basis. This was the first time on-set editing had been used on this scale, and it earned Machliss and Co-Editor Jon Amos numerous awards and nominations.

“It was a very exciting way to work, and after many years of working in darkened basements, it really invigorated me,” said Machliss. “I’d say that producers are never not going to work in this way again on future productions.

Of his latest project, The Flash, he said: “We’re going to be utilising some very new technology in terms of getting multiple versions of the same actor on screen. I can’t say too much on it now, but it’s going to be worth the wait because it looks fantastic.”