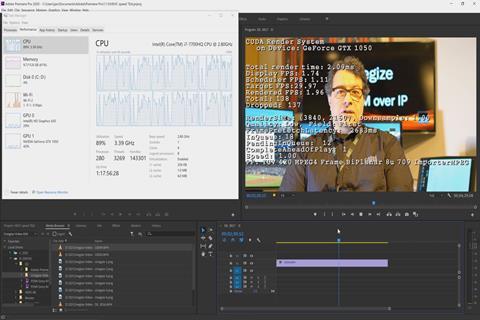 Cinegy: Weigner doing an online demo of Turbocut in Premiere

As Cinegy CEO Jan Weigner explained: “For many years, tens of thousands of users have been using [Cinegy’s] Daniel2 plug-in for Adobe CC, which already offered the Nvidia accelerated export of H.264 and HEVC. So, when we accelerated the editing and import features, it was obvious that the original product name didn’t match the main goal of the plug-in with the Daniel2 video codec technology. Turbocut enables faster editing and production with better video quality and it’s also much easier to remember than ‘Daniel2 Plugin for Adobe CC’.

“This may not be that important for an owner of a dual 28-core Xeon processor workstation, but for those editing on a laptop or small PC and lucky enough to have a recent Nvidia card installed, Turbocut will make a dramatic difference to their editing performance,” said Weigner.

The other main feature of Turbocut is that it brings the Daniel2 video codec to Adobe CC. When editing in the Daniel2 video format, which is the equivalent to Apple’s ProRes or Avid’s DNxHR, editing in 8K resolutions or higher is easily possible, even on relatively low-powered machines (such as those with quad core processors) or laptops.

The Turbocut plug-in also enables the use of the Daniel2 video codec as a preview file format, providing another significant performance boost over other codecs. No matter what source format you are editing in, this should improve editing performance. Turbocut is available as a free download from www.turbocut.com.