A couple of seemingly simple updates have made Easyrig’s camera support system even easier to use, especially for gimbal users. 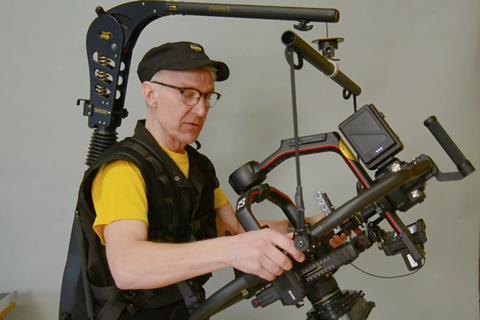 The new EasyTilt was developed as a result of requests from two DoPs (Justin Lovell from Canada and Niklas Johansson from Sweden), who wanted something that made it easier to tilt a gimbal while working with an Easyrig.

The resulting accessory attaches to the gimbal and then to the Easyrig arm, making it simple to balance and tilt a gimbal up to 90º in either direction. It consists of a metal crossbar, spindles (to mount to the gimbal), ropes (to attach the spindles to the crossbar and adjust to ensure everything moves freely) and a ring with a ball stud (for attaching EasyTilt to a Quick Release). It’s possible to use EasyTilt with the Standard Camera Hook as well.

According to Lovell: “The EasyTilt has improved the functionality of the Easyrig in conjunction with our R2 Ronin gimbal. Previously the Easyrig was difficult to tilt the camera up and down with because the pivot point was at the handle (top of the gimbal). That was one of the benefits of the Ready Rig – its ability to tilt up and down easily because of its side-mounted centre pivot point. The Ready Rig was not able to help with panning though because of its arm setup and also low mode was difficult to achieve comfortably. With the EasyTilt, I can achieve the same tilt action as the Ready Rig, plus the added benefit of still having pan functionality and dropping into low mode with ease.”

EasyTilt can be used with the new Stabil G2 arm – the second generation of the Stabil stabilisation arm launched at IBC 2019, which has been re-designed following user feedback.

The arm is now foldable, so it will be easier to travel with. It’s so compact it fits in a queen bag and is now a similar size to the +130mm (5in) arm. The locking pin is now conical, making it possible to lock the arm at 90º without hearing the jittering sound that comes from the arm hitting the pin. Unfortunately, existing users can’t retrofit the new conical pin on an old Stabil. The Stabil G2 also now comes with a hanger, so that users can hang the Easyrig on a Filmcart (or anything that has an edge to it).