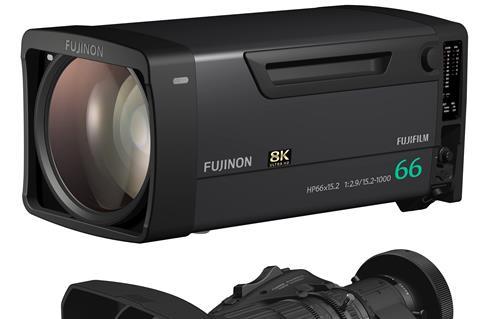 Recording 8K video, which has four times the resolution of 4K/UHD, requires lenses with an exceptionally advanced optical performance. The 66x zoom of Fujinon’s HP66x15.2-ESM box lens is the highest zoom magnification on any 8K lens so far; it is due to be released in the summer of 2020.

The smaller Fujinon HP12x7.6ERD-S9 offers a focal length range from a wide angle of 7.6mm to 91mm in telephoto and should start deliveries in the autumn.

According to Fujifilm, the ultra-high resolution of the 8K lenses “is combined with vivid colour reproduction and high contrast to produce rich tonal gradation in high dynamic range (HDR)”. Both lenses can be used with the focus position demand unit Fujinon EPD-51A-D02/F03, released in March this year, to achieve precise focusing. The combination should simplify shooting 8K video, which demands an advanced level of focusing precision.

The lenses use aspherical and fluorite lens elements to control image distortion and light fall-off at image corners as much as possible, while the use of a floating focus system, which controls multiple lens groups according to the shooting distance, minimises fluctuations in optical performance caused by shooting distance changes.

The lenses use a nine-blade diaphragm to achieve an aperture shape close to a perfect circle, creating a more natural looking bokeh.

Both also have 16-bit encoders, providing high-resolution output of lens data including zoom and focus positions. They enable connection with such systems as a virtual studio for combining computer graphics with live video footage.