Brainstorm has improved the integration of the Unreal Engine from Epic Games into InfinitySet, giving it “the best integration in the marketplace”, according to commercial director David Alexander. 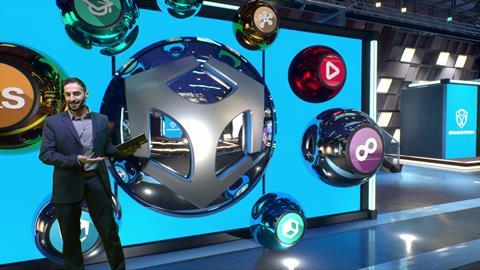 Presenters are rendered as a 3D element in InfinitySet

Alexander says this is “hugely beneficial” because it allows hyper-realistic content to be combined with Brainstorm’s own virtual set and AR system. “The algorithm we have allows you to build projects much more easily using the capabilities of eStudio [its render engine] with Unreal,” he added.

The presenter is rendered as a 3D element in the VR, rather than 2D, for added realism and better interaction. All shadows and reflections are correct. “The key is to have a real image and virtual environment image identical, so you can’t see the difference,” Alexander said.

Brainstorm is also showing integration with the very widely used Unity cross-platform game engine at IBC, which Alexander reckons will attract a lot of interest.