The new Lupo Smartpanel is a compact on-camera light that outputs 4200 Lux at 1m – about the same amount of light as many bigger, more expensive 1x1 LED panels, but in a package measuring 150x40x85mm. 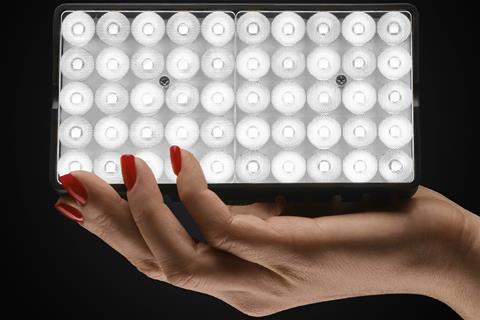 Indeed, it is claimed to be “the most powerful on-camera light on the market,” and “also the smallest LED studio light in the world”.

It uses the same technology as its bigger siblings, Lupo’s Actionpanel and Superpanel, which is claimed to give it professional performance and light quality, but at an affordable price – £134 (+VAT).

The dual colour 20-Watt LED light weighs 300g and can be powered using an NP-F-series 7.4v battery (which can be attached directly to the back of the light) or a 14.8v V-mount unit (via a D-Tap cable), or from mains power. It has variable colour temperature from 3200K to 5600K, with a Television Lighting Consistency Index score of 98, but a narrower than normal beam angle of 40º – due to the intensifier in front of the LEDs which gives it such high output.

It is designed to be robust, using reinforced technopolymer construction, and comes with a ball head camera/stand adapter, a USB Type-C cable and diffuser.