Deity Microphones has announced the launch of its first compact micro on-camera microphone, the D4 DUO. 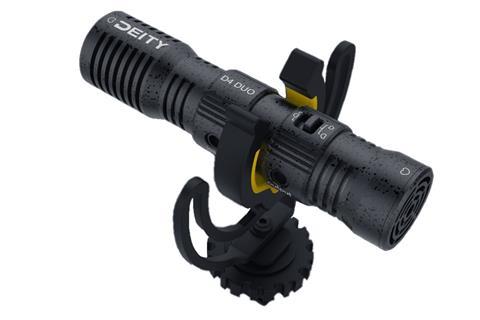 Deity Microphones: Launches its first entry into the micro on-camera mic market with the D4 DUO

The microphone incorporates dual cardioid capsules to capture the front and rear soundfields around the camera. This makes it possible to capture the camera operator directly, ensuring that they don’t sound muffled or distant when they narrate a scene or ask a question on-camera.

The D4 DUO also incorporates an aux 3.5mm input that bypasses audio from the rear microphone capsule. This puts the front capsule’s audio on the left and the aux audio on the right channel of the user’s camera or recorder. According to Deity Microphones, this means that it is now possible to capture crisp lavalier quality audio during an interview and record a dynamic soundscape of natural sounds around the operator that can be layered back into the interview in post.

Expected to be in stock at local dealers at the end of Q2, the D4 DUO will ship with two Deity faux fur windshields, a Rycote Lyre Shockmount and a coiled 3.5mm TRS cable.

Andrew Jones, brand developer of Deity Microphones, commented: “The D4 DUO really embodies our company motto of product design, which is ‘Do More, Carry Less’. Why carry around bulky audio attachments when you don’t have to? Videographers and content creators carry enough as it is… shouldn’t their gear do more than just one task?”