Future of voice control for consumer interactions with Internet of Things systems: in the context of integration with other services offered by traditional service providers

The Internet of Things (IoT) is emerging as an ecosystem of connected sensors, and wearables that communicate with cloud-based intelligence to generate value-add actions at consumer premises over mainly mobile devices.

However, the feedback from initial deployments indicates that there are significant barriers to the average consumer in the areas of installing the equipment, connecting it to the controllers, and setting up and managing new services.

Products and services for IoT in the home (Home IoT) target consumers’ premises devices and the connected objects surrounding us. This paper outlines the unique opportunities and challenges that Home IoT and Health IoT will present to existing service providers. The author will review the general readiness for IoT of the existing networking technologies in our connected homes and analyse the longevity of the current connections to the cloud where the service intelligence will reside.

As the population in developed countries ages and installations of flat screens continue en-mass, consumers’ affection for large TV screens grows. As a result, increased opportunities will emerge for future IoT services to use large screens as user interface portals. Devices like set-tops and gateways that are currently being provided or certified by established service providers would have a role in delivering these services.

Gateways and set-top boxes have historically been regarded as safer than PCs, tablets, Over-the-Top (OTT) mobile devices, and webcams when it comes to data security and privacy. Enabling personalized interaction with these devices will be key to addressing varied levels of consumers’ cognitive and physical abilities.

The set-top boxes with their remotes (pilots) are already well accepted as a means of interacting with service providers’ systems. The rapidly growing voice recognition and the resultant service control using natural language will play a significant role in making self-creation of new services and interaction with them simple and manageable by an average consumer.

WE ARE FORTUNATE TO LIVE IN INTERESTING, FAST-CHANGING TIMES

The impact on our lives made by ubiquitous, standards-based connectivity across man, machines, and surrounding us via “clouds of intelligence” can be seen everywhere. Nowadays, we “wear” computers exceeding the ones that took us to the moon, and these mobile devices can interact with an unlimited volume of “smarts” in massive data centres.

A simple law spelled-out by late Gordon Moore, one of the founders of Intel, continues to make impact on size, cost, and power consumption of processors, memory, wireless radios, and physical sensors. It is extremely easy to augment a simple, every day-use device or relative complex systems that we interact with a “communicator” and put its functionality under the supervision and control of the cloud-based intelligence.

Internet standards applied to the physical and software design of such an add-on almost magically changes simple things around us into citizens of “Internet of Things” eco systems. 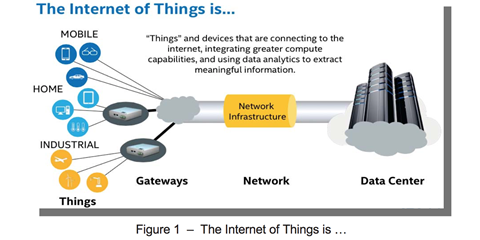 Early deployments of Industrial IoT systems are proceeding quite nicely as a continuation of automation of manufacturing and business processes with extensions to improve efficiencies in connected cities and communities. On the other hand, Home IoT, after the initial phase of enthusiasm of early adopters and lofty predictions by analysts, has run into several roadblocks.

OTT IoT service providers, with roots in consumer electronics, started selling vertically integrated solutions consisting of a hub, a mobile app, and a set of theoretically interoperable sensors, bulbs, thermostats, webcams, locks, and actuators that were made by traditional makers of either proprietary or unconnected “things”. Use cases so far concentrate on simple automation, temperature control, and scheduling of lights. Also, webcam to the mobile phone streaming (via a cloud) became available as a service.

The search for recurring revenue is increasingly more difficult as an average person tends to believe that they can install and manage the “things” themselves and next finds out that a value proposition of such a ”Do it yourself” (DIY) service is not very attractive. What is not helping the perception of early DIY IoT is poor reliability of the connections inside the house, outages of the devices, webcams, hubs, and even problems with the OTT clouds.