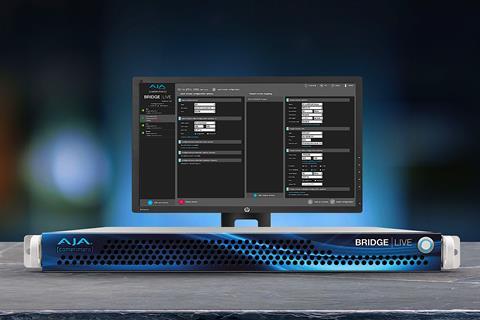 Bridge Live combines AJA’s I/O technology with Comprimato’s powerful encoding, decoding and transcoding software, to provide high-quality, cost-effective video processing, with SDI encode or decode for one channel of UltraHD up to 60p, or up to four channels of 1080/60p simultaneously, via four 12G-SDI connections that are also backwards compatible to 6G, 3G, and 1.5G SDI.

It can be used as a ‘set and forget’ resource, working in the background to convert baseband video to and from live compressed streams, including multiple outputs and destinations from SDI inputs. Bridge Live supports a wide variety of audio stream and codec choices from AAC to uncompressed PCM, with the ability to apply gain and sample rate conversion and remap channels. It also includes deep metadata support, with closed captioning, ad insertion markers and the ability to embed subtitles.

“Bridge Live delivers one of the most cost-effective and feature-rich enterprise-level offerings on the market for live video encoding, decoding, transport and streaming,” added Jiri Matela, CEO and co-founder, Comprimato. “With the ability to encode and decode, rich metadata support and intuitive design, Bridge Live opens up new workflow efficiencies and content monetisation opportunities, among a host of other advantages.”

AJA has also announced its first partnership with Audinate, developers of Dante IP-based audio networking, to launch the first 12G-SDI embedded audio to Dante audio bridge. The new OG-Dante-12GAM is an openGear, Dante IP audio embedder and disembedder, with dual 12G-SDI ports, 64-channels of audio and DashBoard control software integration. It provides high-density infrastructure that bridges Dante to SDI and back simultaneously, and allows for up to 640 channels of SDI/Dante audio bridging within a single 2RU frame housing 10 cards.