The Merging+Anubis SPS is now shipping with full ST 2022-7 compliance. The enhancements to the compact AD/DA interface were developed in a matter of months despite the additional challenge of sourcing components and dealing with global lockdowns in the midst of the COVID-19 pandemic. 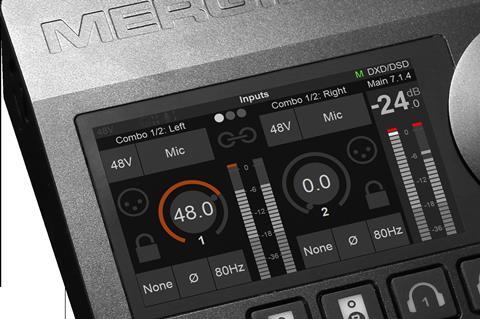 Also new is a compact desktop controller/monitor with a host of other features that can interface with other NMOS-compliant equipment and is capable of monitoring Virtual Machines, all with full redundancy. This provides a scenario where local production satellites can use Anubis SPS in their workflow and feed ST 2022-7 back to the central resource, which is similarly equipped to receive the streams on the same equipment which is fully integrated into the VM environment.

After showing its compact AD/DA interface at a series of trade shows in 2019, Merging Technologies reported that both first year sales and the diversity of the customers using the Merging+Anubis SPS exceeded expectations.

The company claims the fact that Merging+Anubis SPS is at its heart a powerful RAVENNA/AES67 hub was quickly realised by major international broadcasters looking to move their operations to regional data centres linked by IP. Anubis is ST 2110 compliant, so broadcasters are now using it to monitor large numbers of AES67 audio streams in a compact and affordable package.

A frequent request from early adopters, however, was to make Anubis ST 2022-7 compliant, and the response from the Merging engineering team was immediate.

Merging reports that the initial deliveries have been made to dB Broadcast for installation at locations for a multinational mass media company and a pan-European television sports network. A quantity of Anubis SPS interfaces is also following the original Anubis to the world’s premier multinational technical production partner as a key element of its remote production facilities.