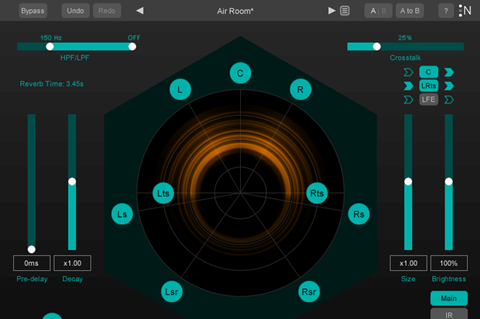 It also provides ‘an unprecedented level of tweak-ability’, with Impulse Response able to be tweaked to create an almost limitless combination of spaces.

The IR panel enables users to make changes to the frequency response of real spaces by EQ’ing the reverb model and altering the frequency-dependent decay rate. Unlike traditional convolution reverb, Paragon does not use static IR, which provides a wider scope to transparently transform the sound of a space.

Paragon reverb operates in up to 7.1.2 channels of audio, making it suitable for surround applications, including Dolby Atmos. Further, it features individually configurable crosstalk per channel, unique technology for re-synthesis of authentic IRs, HPF and LPF per channel, switchable LFE and spectral analysis.

Paragon’s adjustable crosstalk is said to create a sense of liveliness and interaction between channels and allows users to produce surround reverb even from mono or stereo sources. It also offers the control and flexibility to determine how reverb from each channel interacts with the other channels, for example improving dialogue intelligibility by removing reverb from the centre channel but maintaining a sense of space and location by sending the dry centre channel audio to other reverb channels.