Video review and collaboration specialist Frame.io has surveyed its customers about working from home during the pandemic and found that from nearly 600 responses, most from people in post production, 73% said that they’re equally or more productive working remotely. 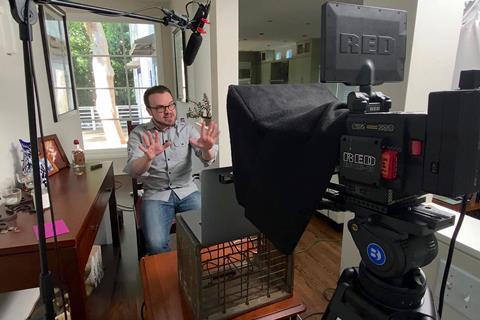 Even before quarantine, respondents said that they spent 65% of their time working without direct client interaction or supervision—and that number increased by only 10 percentage points during quarantine. “This supports the theory that the most efficient approach to complete the majority of our tasks live inside asynchronous models,” commented Michael Cioni, Frame.io’s global SVP of innovation.

Pre-quarantine, 50% also said that they relied on in-person communication to do their work, so “half of those we surveyed didn’t feel that in-person communication was necessary. When you combine that statistic with the 73% who said that they’re more productive while working from home, you get a sense of the strong support for long-term adoption of remote workflows,” he added.

Beyond that, when it comes to quality of life, 65% cited an improvement in work/life balance thanks to working from home. “The average person in our survey saved 53 minutes per day on commuting,” which they were able to use to focus on non-work activities or to catch up on sleep.

Cioni believes that the extra 260 or so hours a year not lost to commuting could allow creatives to spend more time creating, whether completing passion projects or from a post house or VFX facility perspective: “How much more could your creatives accomplish while still gaining a better work-life balance?,” he asked. “Isn’t that worth exploring permanently?”

“When 2020 began, we had a normal way of doing things. But over the last three months, all of us have been experiencing a new form of normal. During this journey between the old and the new, we’ve all faced some enormous challenges which people describe as making them feel uncomfortable, anxious or cautious,” he said.

“We’ve had to react to a crisis, manage concerns and doubts, and many of us are unsure about what the future holds. But I find that every time we face words like that, it means we’re on the edge of making an innovative breakthrough. The question is, are you trying to get back to normal? Or are you willing to invent something entirely new?”

In the series, colourists at post house Light Iron said they felt, at first, it was more challenging to not be in the same room with the director or DP. “But as they grew to depend on asynchronous communication, they realised that there are more instances in which, with the right tools, it was preferable for both parties to take their time to really digest the material without the pressure of an on-the-clock session in a specialised facility,” said Cioni.

Other advantages for working remotely interviewees mentioned included: being able to utilise resources and people more efficiently; cost benefits of not having to be in expensive cities like London or LA; and the ability to spend more time with families without affecting work.

Light Iron also found that working in a more distributed model increased throughput and simultaneously reduced wait times. “This could mean facilities can identify and concentrate on higher margin tasks that leverage a web model or scale up their reach by working in territories previously only made possible with brick and mortar,” said Cioni.