Riedel Communications has announced a significant expansion of its MediorNet family of video networking devices. 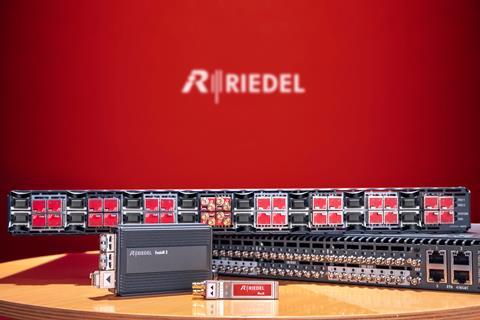 This will meet the distributed routing, processing, and multiview requirements of SDI, IP, and hybrid production environments, according to the company.

Close collaboration between product management and engineering teams from Riedel headquarters and Riedel Montreal, formerly known as Embrionix, also brought forth the MediorNet MuoN, VirtU, and FusioN product series. Based on ultra-dense SFP technologies, these new processing modules and processing hubs complement the intelligent MediorNet signal interfaces and core switches and round out the Riedel video portfolio with full-IP solutions.

MuoN SFPs are pluggable gateway and processing devices delivered in a compact form factor that can be used inside VirtU frames or commercial off-the-shelf IP switches. The software-defined MuoN hardware is available with a range of different input and output configurations, including BNC, fibre, or HDMI, and can be configured with a variety of different apps. A change of the software license turns the device into an up/down/cross-converter, a JPEG-2000/XS encoder or decoder, an audio router, or even a multiviewer.

Riedel’s portfolio of distributed video network devices is also enlarged by the VirtU and FusioN product series. The VirtU high density core infrastructure platform can host a large array of Riedel MuoN SFP processors in 1RU and can be used both as a bulk gateway and as a high-density processing unit. Similarly, FusioN is a series of compact, stand-alone I/O and processing devices that are configurable with a range of software apps.