Eurosport rolls out mixed-reality Cube studio for US Open coverage 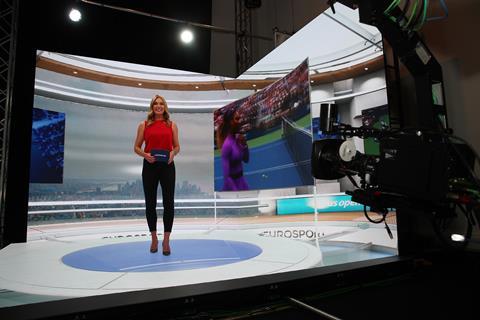 The Cube: VR used to allow players to appear virtually

Eurosport is launching its innovative interactive mixed-reality studio Eurosport Cube for its coverage of the upcoming US Open from New York.

Barbara Schett will anchor coverage from the Eurosport Cube in London throughout the two weeks of the tournament with Mats Wilander providing expert analysis with the new technology.

Boris Becker and Justine Henin will also be beamed into the Eurosport Cube studio in London directly from their locations in Munich and Paris respectively.

The Eurosport Cube creates a virtual world that remotely connects the players in New York with guests, hosts and experts from anywhere in the world.

The technology allows true interaction, with the players appearing physically in the Cube with a direct eye-line between guest and host.

The Eurosport Cube is the result of three years of research and development by Eurosport, White Light Ltd and Disguise. It measures is 4m x 4m and is made up over four million LED pixels.

It can be constructed in a day, aided by an auto-calibration system which speeds up the lens and camera tracking setup. It includes a sophisticated tracking solution which allows the lighting to automatically follow the presenters in the space, which enables presenters to interact with AR graphics or props.

Andrew Georgiou, president, Eurosport and global sports rights & sports marketing solutions said: “The award-winning Eurosport Cube was the hit of the Olympic Winter Games PyeongChang 2018, winning praise from sports fans for its game changing analysis and lauded by the industry for redefining the Olympics viewing experience. We subsequently worked hard to take it to the next level and integrate the latest technology with a plan to bring the Eurosport Cube 2.0 to Olympic Games Tokyo 2020.

“With the Games re-scheduled to next year but the experience ready to go, there really is no better arena than Grand Slam tennis to see the return of the Eurosport Cube. We will not unveil all the bells and whistles straight away as we will keep a few elements up our sleeves for Discovery’s coverage next summer that will feature every minute of the Games and analysis a multitude of sports. As we look to the US Open, we believe the Eurosport Cube can transform how fans connect with tennis and the players, bringing to life technical nuances and the reasons matches are won or lost in a way that’s never been seen before in the tennis.”

300 hours of live coverage from New York kicks off on Eurosport on the afternoon of Monday 31 August (CEST).