Dejero and private wireless network specialist Rajant teamed up to provide a robust wireless network blended with cellular connectivity to support coverage of the 2020 US presidential election for broadcasters in Washington, D.C. 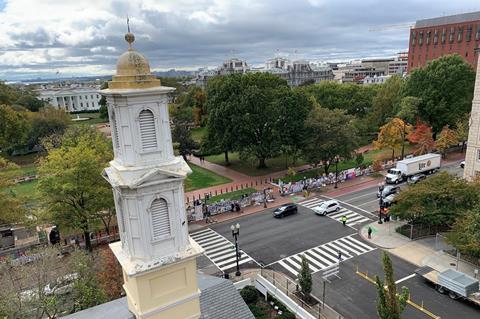 Dejero: The solution enabled news organisations to broadcast live from around the White House

This combined connectivity solution eliminated potential signal drops and communication gaps, allowing news organisations to transmit live video of the occasion without worrying about the possibility of cellular network congestion.

US presidential election coverage is typically the biggest event for news organisations and broadcast networks in the United States, and a major story for international media. Reliable connectivity is critical for live shots from around the country, and in particular from the nation’s capital.

“Cellular networks can become congested, particularly in locations where large crowds gather, and that is a concern on election night for broadcasters,” said Jeremy Miller, global director of technical account management at Dejero. “With the ability to blend a WiFi mesh network with multiple cellular networks from different providers, we’re able to provide our customers with peace of mind.”

The setup utilised Rajant’s Kinetic Mesh networks, which provide fully mobile broadband connectivity that is said to be simple, instantaneous and fail-proof in any application. The resilient mesh network set up in D.C. was designed to move and evolve with connectivity demands.

“Being able to seamlessly work off both 5GHz and 2.4GHz WiFi in a mesh network with mini microwave radios gave our broadcast customers the flexibility they needed to set up shots where they wanted, knowing they had an additional path in case bandwidth from cellular connections became limited,” continued Miller. “The solution allowed our broadcasters to deliver seamless coverage, particularly at the crucial peak hours on election night.”

Election day saw record-breaking numbers for Dejero, with nearly 6,000 hours of coverage from local, national and international customers, an increase of nearly 60% more units in the field, and over 19 terabytes of data transmitted, almost double of what was seen in the 2016 election. Dejero will also be onsite in Washington, D.C. to support customers on Inauguration Day, offering a mesh Wi-Fi network, equipment rentals, MultiPoint content sharing and customer support.