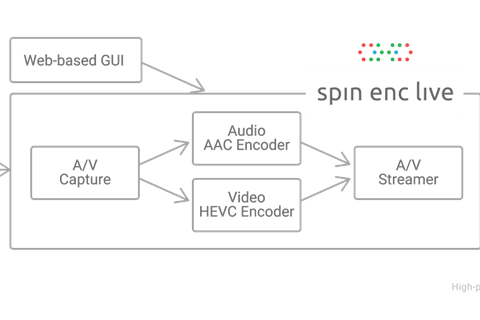 Called Spin Enc Live, it is said to offer the quality, compression efficiency and performance required by the next generation of live Ultra-HD (4K, 8K and beyond) applications in broadcasting and internet streaming.

Spin Enc Live includes not only an optimised HEVC encoder, but also modules for input capture and output streaming, resulting in a complete solution for live workflows.

It is based on Spin Digital’s advanced decision algorithms for fast and high-quality encoding, which are combined with a highly optimised software implementation designed to scale to many CPU cores and fully utilise the latest SIMD media instructions. As a result, the encoder is said to be able to provide real-time operation at quality and compression levels similar to best-in-class offline encoders (typically used for VoD).

In addition, the encoder has been optimised to guarantee minimal latencies in both high-efficiency (long GOP) and low-delay (shot GOP) operation modes, according to Spin Digital.

The company performed objective and subjective analyses in order to validate the quality and compression efficiency of the new encoder. The results show that broadcast-grade 8K HEVC live video is possible over current networks at bitrates as low as 48Mbit/s.

More detailed information about the encoder and its quality and performance can be found in the IBC whitepaper: HEVC Real-time Software Encoder for 8K Live Video Applications.

Spin Enc Live can also be used for other live applications, including 4K with High Frame Rates (HFR) or immersive live experiences with ultra-high resolution 360° video.

Real-time operation can be achieved for video formats such as 4Kp120 or 360° 12Kp30. As more computing resources become available with new generations of CPUs, higher resolutions and frame rates will become possible.

The new HEVC real-time encoder is available now for licensing, either as a complete application (Spin Enc Live), or as a module as part of the Spin Digital SDK (Spin SDK), which enables developers to create their own high-performance HEVC encoding solutions.