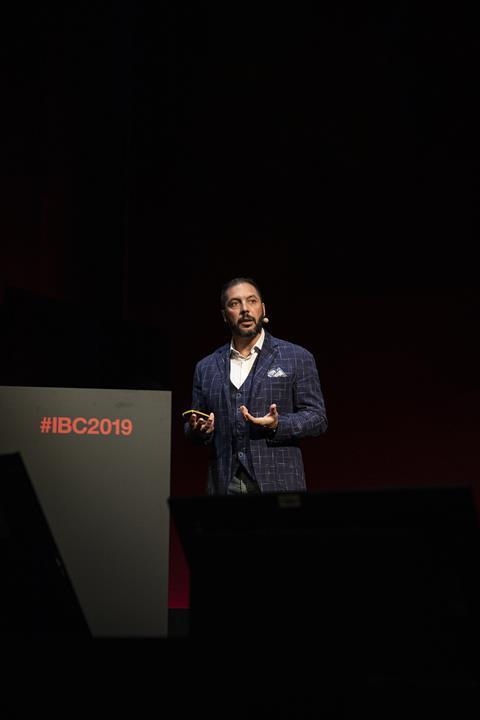 Amordeluso: Voice technology is the now and the future

Amazon’s Max Amordeluso has implored media brands to make use of voice technology such as Amazon Alexa or ‘be left behind in the voice revolution’.

“We are at the beginning of a new phase - and the time for introducing voice activation technology to devices is now, said lead evangelist for Amazon Alexa in Europe Amordeluso. “If you are not there as a developer or manufacturer you are going to lose out.”

Amordeluso told the IBC2019 audience that there were plenty of agencies out there specialising in helping brands and media companies to harness the power of voice.

Companies such as Spotify, Fitbit, Uber, WSJ and Twitter have already added Alexa to allow voice activation of their services, with Amordeluso adding that the number of people working and devices integrating Alexa technology was growing fast. Alexa-enabled devices can also control basic function on Amazon’s FireTV digital media player.

He said his mission is to introduce Alexa to European developers, and demonstrate how they can build natural voice experiences for customers.

“Over 100 millon Alexa-enabled devices have been sold, and hundreds of thousands of developers are working on an Alexa experience,” he said.

Tens of thousands of developers have built skills using the Alexa Skills Kit (ASK), a collection of self-service APIs, tools, documentation, and code samples aimed at allowing companies to build voice technology into their products.

“Millions of customers have more than one Alexa device, over 90,000+ have Alexa Skills, and there are over 60,000 smart home products that can be controlled with Alexa.”

Amordeluso said that voice is the latest iteration of human interaction with computers. “Our vision is to make Alexa available everywhere so we need third party developers to put Alexa into products. Our intention is to open up its framework to 3rd party creativity and bring forward the voice revolution.”

He claimed three major factors had underpinned the take-off of voice interfaces. “First came improvements in feeding data to machine algorithms, a process which Alexa uses extensively to improve and evolve as an assistant. Secondly, the evolution of the cloud meant virtually unlimited storage, which is another essential part of Alexa.”

“The third factor is that voice is natural –not some foreign thing that we have to learn but something that we all automatically understand.”

Amordeluso also dismissed privacy concerns around Alexa. “We have been working a lot to maintain the trust that customers have given us. Alexa has a wake word detector and she doesn’t stream what you say to the cloud until she hears it. You also get visual feedback in the form of a blue light on devices when you are connected.

“You can also delete your history anytime, although we hope you keep it as Alexa learns as you go along. Plus there is always a mute button to electrically disconnect the mic.”