Vivendi and Mediaset: the end of hostilities?

After a long-running feud, there are signs that Vivendi and Mediaset may soon resolve their differences. Does this mean that Mediaset’s ambition of creating a pan-European TV champion to counter US streaming giants might one day be realized? 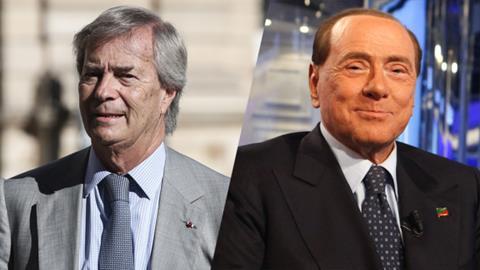 Could a four-year stand-off between the billionaire media owners of Mediaset and Vivendi be set for resolution – and mark the birth of a pan-European TV champion to take on the US streamers?

Reports suggest a long-running feud between Mediaset, controlled by the family of former Italian prime minister Silvio Berlusconi, and Vivendi, effectively controlled by French industrialist Vincent Bolloré, may be coming to an end.

Reuters reported last week that French media group Vivendi has asked to meet top executives at Italian broadcaster Mediaset to discuss a deal to end their row, citing sources with knowledge of the matter.

The two groups, locked in a whole series of legal arguments, have clashed over the Italian firm’s plans to create a pan-European TV champion through a Dutch-based holding, MediaForEurope.

Mediaset and Vivendi have been embroiled in a protracted dispute since Vivendi walked away from a deal to buy a pay-TV business from Mediaset in 2016 over a disagreement about the unit’s value.

As relations deteriorated, Vivendi built up a 29% stake in Mediaset, becoming its second-biggest shareholder behind the Berlusconi family, which holds a 44% stake in the company through their holding company Fininvest. The move was considered hostile by the Italian group.

However, Mediaset managed to have most of Vivendi’s voting rights frozen on antitrust grounds, because Vivendi also owns a stake in Telecom Italia.

A legal case has been ongoing ever since and attempts to reach a wider settlement have so far proven unsuccessful.

Last year, the row between the two companies intensified. Mediaset announced plans to move its base to Amsterdam and to merge its separately listed Italian and Spanish units into MediaForEurope, a single pan-European company.

The combined company would operate in Italy, Spain and Germany, where Mediaset acquired a 9.6% stake in broadcaster ProSiebenSat1 in May 2019.

MediaForEurope’s ambition is to “become a leader in linear and non-linear entertainment, leveraging tech and data to compete on an equal footing in the evolving media space,” said Mediaset when unveiling the plan. “The goal of this alliance is to develop economies of scale which are crucial for the future of European TV.”

Under the plan, Mediaset would own about 35% of MFE and slightly more than 50% of voting rights. Vivendi would hold roughly 23%.

“The goal of this alliance is to develop economies of scale which are crucial for the future of European TV.” Mediaset

Pan-European powerhouse
On the face of it, the deal makes perfect sense. Mediaset management wants the new company to form the basis of an alliance among European broadcasters to counter the growing power of US streaming giants.

However, Vivendi has opposed the move, seeing it as a tactic by the Berlusconi family to strengthen its control over the company, and not a sincere attempt to build a pan-European powerhouse to compete with the likes of Netflix, Amazon Prime and Disney Plus.

Bolloré himself has long held ambitions to turn Vivendi into an international powerhouse itself, able to compete with US studios. As well as ownership of Canal+ and Studiocanal, Vivendi owns a 32.9% share in Banijay, which has expanded its global reach since closing its acquisition of Endemol Shine this year. Banijay is now the world’s largest non-US television producer-distributor.

Opposition from Vivendi led to the MediaForEurope project being suspended by a Madrid court last year.

On August 5, Mediaset announced it had dropped the plan after the Madrid court last month rejected a bid to have the suspension lifted, saying the ruling made it impossible to complete the project in the time available.

But Mediaset said the MediaForEurope plan remained valid and it “has immediately launched a study for the creation of an alternative plan to achieve the same objectives.”

Vivendi wrote to Mediaset after last month’s court ruling, saying it was ready to support the Italian broadcaster in its cross-border growth strategy. The letter from the French media group proposes governance changes without penalising minority shareholders as well as openness to an industrial partnership.

Mediaset said Vivendi’s offer was not satisfactory, but that it was open to starting talks with the French group over international growth plans creating value for all the group shareholders, including majority investors.

Mediaset’s board has reportedly invited Vivendi to submit concrete proposals to boost the business abroad, as part of a wider settlement.

The need for alliances between European media companies – such as MediaForEurope - was highlighted this week by Thomas Rabe, chief executive and chairman of Bertelsmann, one of the continent’s largest TV, radio and publishing groups.

Rabe told The Financial Times that regulators should allow European media companies to pursue mergers and partnerships if they are to have any chance of competing with US streaming giants.

He said that the economic impact of coronavirus on the industry had strengthened his view that it will be necessary to redraw the European media landscape. “There is a strong case and a need for consolidation,” Rabe told the FT. “I’m convinced that partnerships are more important than ever, especially after the coronavirus, which hurt European TV broadcasters and has helped the US streaming platforms.”

Streaming services such as Netflix, Amazon Prime and Disney+ have seen their subscriber numbers and revenues boosted during lockdowns worldwide, with millions more watching content online.

Although audiences also grew among European TV broadcasters for the same reason, these groups have suffered from a sharp drop-off in advertising. Shares in RTL, which is the only listed part of Bertelsmann, have dropped almost 40 per cent since the start of the year. ITV’s share price, meanwhile, has more than halved over the same period.

Not everyone sees the logic of a pan European broadcast alliance, however. Rainer Beaujean, the CEO of German broadcaster ProSiebenSat.1 Media said in June that a cross-border European TV merger would make little sense, pushing back against calls for closer cooperation from Italy’s Mediaset.

“A trans-European merger would bring few synergies,” Rainer Beaujean said in response to a question at ProSieben’s annual general meeting, adding that such deals would not help to cut costs for local programming.