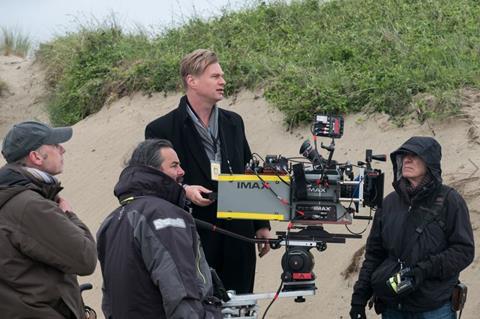 Dunkirk and The Dark Knight film director Christopher Nolan has urged filmmakers to give audiences a reason to leave the house and to continue inventing new genres for the future success of cinema.

Addressing the challenges new players including Netflix and Amazon are causing for traditional theatrical experiences, he celebrated cinema and the unique experience for audiences.

Nolan delivered the remote keynote during the UK Cinema Association conference yesterday in London, he called on help from delegates and exhibitors “to really help us,” and according to Screen Daily appealed for partnerships in a move to engage audiences.

“What we never want to forget is the idea of showmanship… Whatever the economic realities are, whatever costs need to be cut or corners need to be cut.”

He continued: “It is a tremendously exciting time to be putting films into cinema.

“It’s been really quite marvellous over the last 20 years to see more of a renaissance, to see more innovation and thought going into the exhibition side of presenting our films.”

Nolan pointed to the vast amount of opportunities open for filmmakers and exhibitors.

He said: “We will certainly be asking [exhibitors] to really help us and asking you to be our partners in terms of putting on a show for the audience and giving them a reason to come out for the evening and engage with the world of cinema which we all love so much.”

Nolan is a renowned supporter of cinematic experiences and the longevity of film projection.

Read more Dunkirk and the return of large format film

Nolan joins filmmaker Steven Spielberg who has been reported as being outspoken on his desire to keep Netflix from taking home big wins away from traditional theatrical productions.

Spielberg’s comments came after the Oscar Awards where Netflix’s Roma was nominated for Best Picture and won Best Director.

According to reports, Nolan who is celebrated for his work on Inception, The Dark Knight and Interstellar, has questioned the streaming model of distribution in its attempt the enter the traditional cinema arena.

He was outspoken in arguing the concept of watching a movie online will never feel as life-like or look as good on a laptop screen.

During his eight minute pre-recorded speech Nolan recalled the joys of cinema form his formative years.

He said: “My enduring memories are of scale, of the size of screen, the idea of seeing people and places that are larger than life, potentially overwhelming but engrossing and involving.”

“My memories are not just of the films themselves and the amazing adventures unfolding on screen, they’re also of the sense of occasion, of being a young child entering an architectural space that’s so much bigger and grander than myself, the thrill of the curtains opening, moving to enlarge the screen for a widescreen presentation.”

Urging filmmakers to take responsibility of the craft as well as the opportunities.

“To use the big canvas that [exhibitors] can supply us, and tell stories in an exciting way, and bring fresh ideas, fresh takes on existing genres and new genres and to invent new genres.”

He concluded: “It’s been great to realise that we have partners out there who can innovate, who can build theatres and renovate theatres in exciting new ways to bring new audiences in and give people a reason to get out of the house.”

Nolan also confirmed he is “about to start shooting” his next film with Warner Bros and will be working with exhibitors to maximise its effect.

The film set to be released in July 2020 has no further details revealed but has been described as Inception meets North by Northwest.