Following its appearance in last year’s Future Zone, White Light is returning to IBC to showcase the latest version of its SmartStage technology.

SmartStage is an immersive video environment which replaces the traditional green screen element of a virtual studio and allows the presenters and audience to see and interact with the content around them. 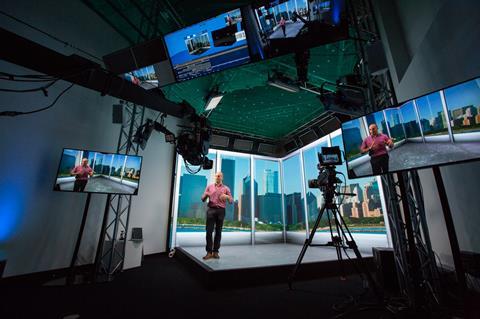 The set-up is scalable to fit any size studio space and allows both lighting and reflections to immediately appear more natural, said the company.

With a disguise media server driving the system, White Light says it has established a new workflow based on a robust broadcast-grade infrastructure, delivering 24/7 operation in demanding live environments.

SmartStage was first showcased at last year’s IBC Show, where the technology’s use on the Eurosport Pyeongchang 2018 Olympic Winter Games coverage won the IBC Innovation Award for Content Creation. The technology has since been used in a variety of applications. A notable recent use was the creation of a fully-immersive, mixed-reality teaching lab at an internationally-renowned business school.

At IBC2019 the company has a presence on the disguise stand, showing the latest developments in the system including advancements in both tracking and lighting, alongside its external graphics workflow integration.

White Light is exhibiting at IBC2019 on Stand 8.