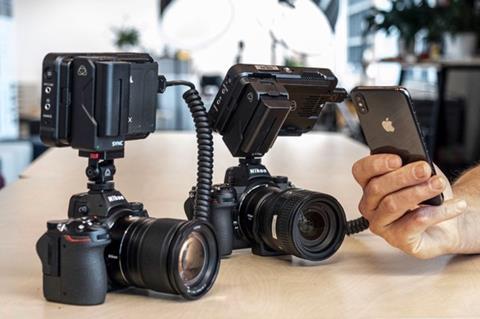 The AtomX Sync module uses the patented Timecode Systems long-range RF wireless timecode, sync and control technology, and can connect multiple Ninja Vs, or cameras and audio recorders equipped with Timecode Systems’ existing UltraSync Blue or UltraSync One devices, at distances of up to about 200m.

At the same time, it can also bring devices into the synchronised system via Bluetooth with a 10-15m line of sight range. On iPhone and iPad this works with apps such as Apogee’s MetaRecorder audio recorder, Mavis Pro camera and MovieSlate8 logging. It is also compatible with professional audio recorders such as the Zoom F6 and F8n.

Using the AtomX Sync module with the Ninja V means that a camera that only has an HDMI output can be used in a professional multi-camera production, with all its recordings instantly synchronised when it is edited – no more time is wasted trying to align clips or running additional software.

Users can connect multiple AtomX Sync-enabled units to form a single network and get frame-accurate control of start/stop and timecode, all touch-controlled from a master Ninja V. Not only will each file recorded be perfectly synced, but they will all be exactly the same length too. The Master Ninja V is also able to synchronise with any number of existing Timecode Systems sync devices, allowing connection to other cameras, sound mixers and sources.

When a device goes out of range it still maintains an accurate clock for as long as needed using its internal professional temperature-compensated crystal. Once the unit comes back into range of the network it seamlessly rejoins it. This makes AtomX Sync suitable for large multi-cam events, sports and venue coverage.

A further advantage is that the module has a small battery inside that also acts as a hot-swap, continuous-power battery extender, meaning a Ninja V can keep running for about five minutes while the main battery is changed.

The system also overcomes a problem with HDMI audio, where previously users taking audio from an external source running directly into the recorder’s mic input had to set up an audio off-set delay in their Ninja V menu. This was often a case of trial and error to get perfect lipsync between the two sources. Now, the AtomX Sync can calibrate this automatically. It works out the difference between the HDMI embedded audio and the external audio input for any specific camera setup in a process that takes less than two seconds.

The Sync module is the second in the AtomX plug-in range, joining the AtomX SDI module, which turns the HDMI-based Ninja V into an SDI recorder/monitor. It is currently on a promotional offer (bundled with the Ninja V) for $599/€599.