Blackmagic announces The Atem Mini Pro, a new low-cost live production switcher that is said to be perfect for setting up broadcasting from home. 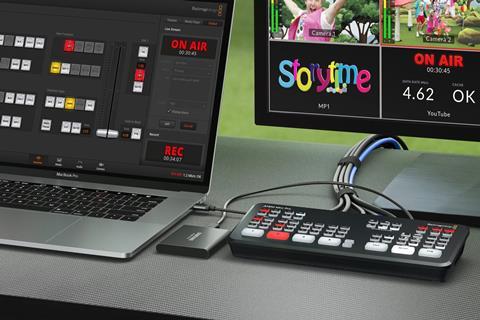 It takes all the features of the Atem Mini (launched at IBC 2019) and adds a new hardware engine to allow direct streaming via its Ethernet connection to YouTube Live, Facebook and Twitch.

There is also support for recording the stream direct to USB flash disks in H.264, plus support for recording to multiple disks for continuous recording. The new $595 model also includes a multiviewer on its HDMI video output that allows all inputs to be viewed on a single monitor, as well as live status of recording, streaming and the audio mixer.

The Atem Mini switchers simplify multi-camera production for live streaming to YouTube, Skype or Zoom, with switching between four high-quality video inputs. They can also connect a computer for PowerPoint slides or gaming consoles and feature a built-in DVE for picture-in-picture and other effects. The switchers also have a USB that works like a webcam for use with any streaming software, plus HDMI out for projectors.

The source buttons are large so it’s possible to use it by feel, letting the presenter do the switching. There are even buttons for audio mixing and, on the Atem Mini Pro, buttons for record and streaming control and output selection. There is also a still store for titles and graphics accessible via external software control.

Each of the four HDMI inputs have their own dedicated standards converter, so that 1080p, 1080i or 720p sources will automatically convert to the video standard of the switcher, for use with a wide variety of cameras.

For a more broadcast-style workflow, customers can remote control their cameras from the Atem Mini. Blackmagic Pocket Cinema Camera 4K and 6K models can now work as studio cameras with control sent via the HDMI connection. This allows users to control camera settings and the camera’s colour corrector from the Atem Software Control (for Mac and Windows). It also has chromakey for green/blue screen work.

“What’s been surprising is the types of work customers have used the Atem Mini model for; we never expected it to be used for such large events,” said Grant Petty, Blackmagic Design CEO. “So now with this new Atem Mini Pro model we are making this easier because customers can stream via the Ethernet, while at the same time record to files on a USB disk, all while monitoring all cameras, media and status on a single HDMI video monitor.”

Blackmagic has also released a free Camera 6.9 update for its Pocket Cinema Camera (4K and 6K) that adds studio camera features such as remote control, tally and DaVinci colour corrector, and enables them to work with the Atem Mini switchers.

“This is a massive software update for HyperDeck Studio Mini and it’s like a whole new model, but because it’s a software update, thousands of customers will get it for free,” said Petty.