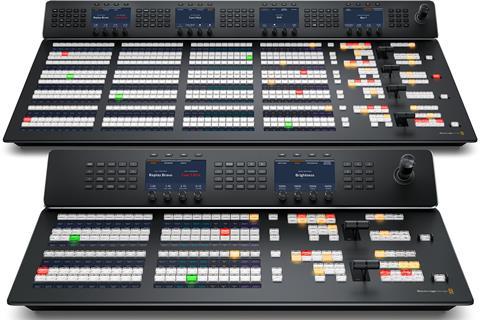 The panels are large enough that the user has dedicated controls for its largest switchers – up to the Atem Constellation 8K.

The new design allows both desktop use or inset mounting for a flat control surface. The panels are available immediately from $5,995 (excluding taxes) – about $9,000 less than Blackmagic’s previous 2 M/E panel that the new one replaces. They join an existing 1M/E model, which has also gained new features through a software update.

The panels give users “an enormous amount of control, allowing [them] to set up more complex effects. It’s also a nicer way to work because customers have physical broadcast-quality buttons, knobs and a T-bar fader so [they] can access all features in the switcher, all at the same time,” the company said.

The 2 M/E model features two M/E rows with 20 input buttons and two independent system control LCDs for each row. Each row can control up to four M/Es in larger switchers. Both rows and all input buttons include LCDs for custom labelling. Each row also includes an independent select bus. It is small enough to be portable.

The $17,995 4 M/E model is big enough to match the features on the Constellation 8K switcher. It features four M/E rows with 40 input buttons per row and four independent system control LCDs for each row. It includes 24 LCDs for custom labelling of every button on every row.

For DVE control, for custom picture in picture effects, there are soft knobs and menus on the LCD for adjusting the DVE position, size and other features such as lighting and drop shadow effects. It can be set up to fly graphics into frame or select any of the pre-programmed push and squeeze transitions. The joystick offers full three-axis control to adjust X, Y and Z positions of wipe patterns and position the Atem Constellation DVEs.

There are hundreds of switcher parameters available for keyers, transition selection, DVE, colour generators as well as switcher video standard, multiview setup and even input button remapping. Users can also save and recall 10 individual panel set ups. Plus, the 2 M/E model has two totally independent system control menus, while the 4 M/E model has a four independent system control LCDs.

Unlike the simpler front panel on the Atem Constellation, the hardware panel includes a preview transition button that lets users simulate a transition or effect before using it, particularly useful for accurately setting up complicated transitions and multi-layered key effects.

The panels can also record and playback macros, so that users don’t need to use a computer for macro work because they can trigger them from the same hardware panel. If users edit or modify a macro the change will appear on all connected hardware or software control panels because the macros are stored inside the Atem Constellation itself.

Because the Atem Constellation includes a standard Ethernet connection, users can use this to control it remotely from any distance. The Atem Advanced Panel, the Atem Camera Control panel and the Atem Software Control for Mac and Windows all connect via Ethernet to the Constellation, so users can set up any combination of panels needed, so that multiple control panels can all work together in parallel at the same time.