Bluefish444 has announced SDI I/O support for real-time 3D graphics and virtual studio software from Aximmetry for its Kronos K8 and Epoch range of video cards. 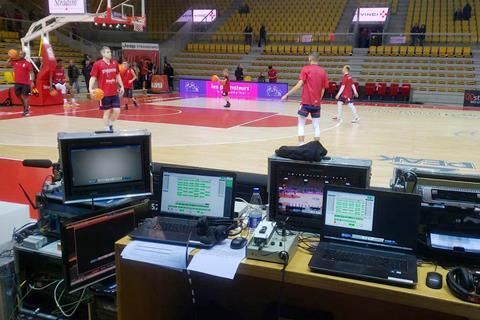 Bluefish444: Data-driven graphics on the cards for Israel’s SegevSport

The company has also been working with Techtel, which used Bluefish’s IngeSTore for parliamentary coverage, while Israeli real-time graphics provider SegevSport has used a combination of Bluefish, Sonnet and Vizrt for data-driven graphics.

The integration between Bluefish and Aximmetry “will provide the highest quality SDI I/O to Aximmetry 3D graphics for broadcast, live streaming, live event and projector/LED wall workflows”, said a statement. All Bluefish Epoch and Kronos video cards feature bi-directional SDI I/O and are compatible with a wide range of Thunderbolt expansion chassis.

“We are very satisfied with the tests performed with Bluefish’s Epoch and Kronos K8 in our own studio and will be gladly recommending them to our clients,” added Orsolya Dormon, Aximmetry’s COO.

Techtel has developed an integrated recording system to manage seven HD-SDI camera feeds for the Tasmanian Parliament. Its main requirements were to have ingest centralised in a single location connected to network-attached storage and for the recording process to be controlled remotely from a network.

To achieve this, Techtel integrated a Bluefish IngeSTore Server to record simultaneously from four cameras at once. IngeSTore uses a RESTful API and supports four channel capture to local or network-attached storage, recording to a variety of broadcast, post-production, archival and streaming formats.

“The RESTful API interface is a game changer for us because it takes us away from needing to install software on premise, which is absolutely vital to our goals of producing cloud native software,” said Mal Chandler, Techtel’s CEO.

To allow the parliament to control the server from anywhere on its network, Techtel built upon the REST API to design a unique user interface with the ability to choose codecs and capture modes directly from a web browser. This interface was derived from Techtel’s bespoke Inflo software integration platform, which connects video files with multiple formats from multiple platforms and applications via one simple user interface.

SegevSport recently updated its mobile production kits, which needed to be practical for its travelling staff and offer both quality and reliability. As SegevSport had been integrating its SportsArt software with Vizrt’s Viz Engine renderer for many years, any new hardware had to be compatible.

It decided to purchase Thunderbolt-compatible i7 laptops with Nvidia GPUs, along with Sonnet’s Echo Express SE 1 Thunderbolt 3 external chassis, with a Bluefish Epoch | 4K Supernova S+SDI video I/O card to integrate with the Sonnet chassis and interface with Viz Engine.

After successful testing, SegevSport fitted out all of its mobile production kits with the combination and has used them for the past year. Each of its staff take two full mobile systems to each event, with the second set backup in case of redundancy, but have not yet needed to call upon their reserve Bluefish cards.

“We like the cards very much,” said Avshi Segev, CEO of SegevSport. “They have worked flawlessly, and we have not had a single event where we’ve had a card failure. The cards are very reliable, easy-to-use with our software and they do exactly what we need them to, when we need them to.”