NetAccess, a web client for remote control of production and archival software IngeSTore, has been released by Bluefish444. 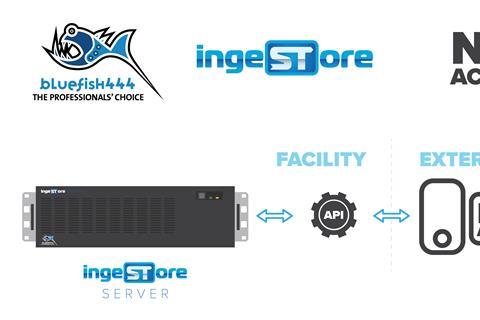 NetAccess: Enables the control of multiple IngeSTore instances via a web browser on a public or private network

IngeSTore NetAccess is a browser-based client which can connect directly to, and control any, IngeSTore Server or workstation from anywhere on a public or private network.

Each Bluefish IngeSTore system supports up to four channels of capture to local or network-attached storage, recording to a variety of broadcast, post-production, archival and streaming formats. The recording channel count can now scale up, with multiple IngeSTore systems able to be controlled simultaneously from the NetAccess browser client.

According to Bluefish, NetAccess provides customers with a quick and easy-to-use solution for the capture of professional video feeds with flexible control from a standard browser interface. The company has also simplified the setup process, enabling customers to get recording immediately, with a guided installer and built-in lightweight web server.

NetAccess is built upon the IngeSTore REST API, which provides an interface for the creation and integration of applications to access and control all of IngeSTore’s features. Established software or new developments can integrate the control of IngeSTore Servers via the NetAccess source code, which can be used directly or customised to the specific requirements of the application.

“Bluefish are extremely pleased to announce the availability of our IngeSTore NetAccess web client. With this, and the release of the REST API, IngeSTore becomes a remotely controlled recorder,” said Tom Lithgow, product manager at Bluefish. “NetAccess can control many IngeSTore systems from any network-connected machine, and the REST API allows custom integration of applications with IngeSTore.”

IngeSTore NetAccess is available now and can be downloaded from bluefish444.com.