Blueshape is introducing a new range of European-designed DV PowerPacks for cameras, camcorders, lights and accessories that will complement its existing V lock and stud mount batteries 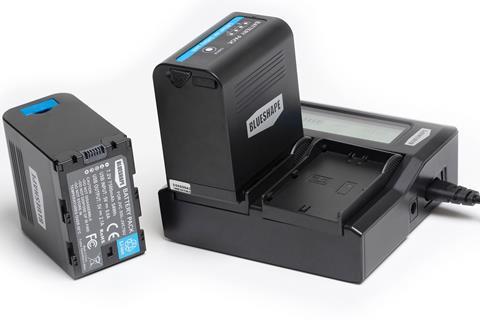 The new lithium-ion models include seven power packs and a dual charger.

The 72Wh BP-975 7.2v model, which is Canon and Red Komodo compatible, will ship in the middle of August. It has a four-step LED charge indicator, weighs 302g and will cost £107.

The small 14Wh LP-E6 7.2v 78g battery (compatible with Canon and Blackmagic), also ships next month and will cost £37.

The new Blueshape Dual charger for DV PowerPacks will work with all of its new DV batteries (via adaptor plates - £10 each). It will ship next month, costing £80, and features an LCD with five-step real-time charge status, adaptable charge rate and USB output. It includes an AC adapter and car charger DC adapter.