Particle Illusion is described as an easy-to-use GPU-based particle generator for motion graphics that render in real time, and now Boris FX has made it available as a free Particle Illusion Standalone application. 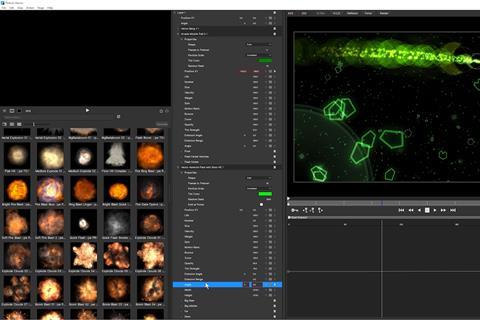 “Particle Illusion’s preset-based particle system will come in handy in every editor’s and compositor’s toolbox. We decided to release the fantastic standalone application free of charge to help out the many artists who might not otherwise be able to afford new software due to the Covid-19 pandemic,” explained Boris Yamnitsky, Boris FX’s founder and CEO.

“To facilitate this new standalone workflow, we’ve introduced export to ProRes, an industry-standard intermediate codec. In addition, Particle Illusion’s saved emitter libraries and projects can be freely shared among users of the plug-in and the free Particle Illusion Standalone application.”

To help users get up-and-running quickly, Boris FX is also releasing free training alongside the launch. This offers top tricks and tips on how to best take advantage of Particle Illusion’s many creative options. “We’ve created a comprehensive series that takes new users from a basic understanding of the interface and presets to creating custom compositing elements and motion backgrounds,” said John Dickinson, director of motion graphics. “The series is perfect for anyone just starting out in post-production or pros looking to update their Particle Illusion skills.”

The Particle Illusion plug-in (for Adobe, Avid, Apple FCP X and OFX hosts) gives users added benefits, such as the ability to view and composite particle animations directly over source footage, Mocha planar tracking and masking tools, the audio-driven Beat Reactor tool and more. Particle Illusion is included in the full Boris FX Continuum suite and is also available as a multi-host Continuum Premium Filter ($295) or within the Continuum Particles Unit ($399).