Brainstorm has collaborated with Spanish broadcaster TVE for a recent news special ‘Vuelta al Cole’ (Back to School), which has received the National Television Ondas Award for the Best News Programme or Special Coverage of the year. 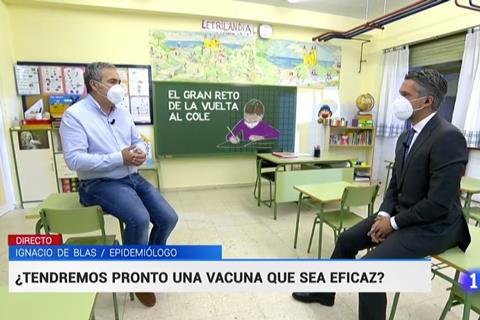 Brainstorm has been working with TVE for years on productions that require the use of virtual scenery or augmented reality applications. On 7 September, it was part of the team responsible for the direction and production of this TVE News Special focused on the beginning of the school year. It was produced remotely from a school in Toledo, Spain, and broadcast from the channel’s News Centre in Madrid, where it was finished by integrating virtual augmented reality content live on a blackboard in the classroom where the presenter was, using InfinitySet.

Brainstorm worked with RTVE to create and calibrate a multi-camera system capable of displaying augmented reality animated graphics perfectly placed over a real-world blackboard, allowing the director to freely use both steady-cam and fixed cameras to display information in an informative and visually appealing manner, at any time, alongside the news anchor.

The broadcast was praised for being highly dynamic, creative and narrative, and “for its commitment to innovate in a dynamic and creative way, something that is necessary in public television. The aspects highlighted are the use of a public school as the news set mixed with digital technology and the transfer of its presenters and some interviewees to the set and giving the news programme narrative coherence.”