BT: Once stable, 5G will be “superior to satellite”

At IBC2019, BT Sport has demonstrated what it claims to be Europe’s first multi-location 5G-enabled remote production.

The UK’s first 5G network went live in ten cities over the Summer, on EE (part of BT). BT Sport had reporters outside football stadia in three locations (in London and Manchester), intercutting with the FA Women’s Super League, which BT currently produces using 4G. The test was conducted using HTC 5G-enabled dongles attached to the cameras. 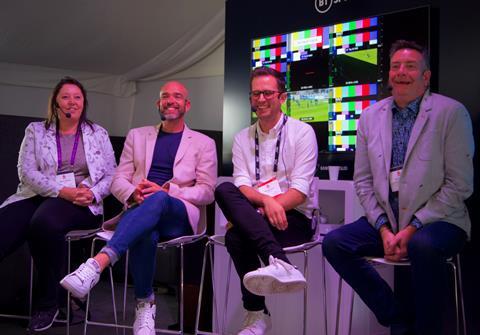 Gemma Knight, match director, BT Sport added: “It’s all about the creative,” with the ability to easily move cameras around on a match day, it can be on the team bus, in a dressing room, the tunnel, or anywhere else. “It can make it look as if we have more facilities.” However, for her the crucial issue is “it has to be stable.”

Stagg believes that once network slicing is available it will deliver a “rock solid” network, “superior to satellite.” Slicing isn’t available with 4G.

Ian Wagdin, senior technology transfer manager, BBC R&D, has been working with the EBU on what happens next. Currently, cutting between multiple cameras on 5G can cause problems with sync. However, a number of devices are being shown at IBC for multi-camera set ups, but the cameras have to be close together. The EBU is currently working on how to sync signals together over the mobile networks. “That is a huge thing,” he said. It may require broadcasters to deploy their own private networks.

While he feels the technology is coming together, “there are a lot of business case and non-technical aspects that need to be discussed further to work out how to deploy this for broadcasters at affordable prices.”