Canon’s new EOS C70 camera is the first in its Cinema EOS range to use the RF lens mount of its smaller R series cameras, allowing the C70 to be smaller and lighter than its siblings. For existing Cinema EOS users buying the C70 there is also a new EF lens to RF mount adapter. 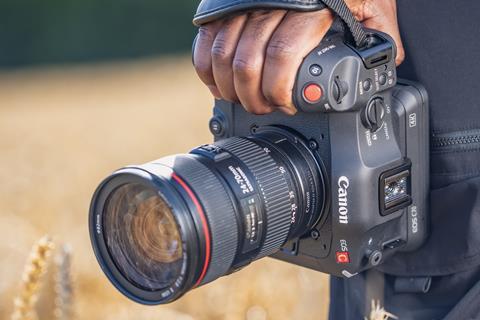 The C70 replaces the current C100 entry-level Cinema EOS camera, and is a hybrid of a stills and video camera, designed to make it simpler for users used to smaller cameras to move to a serious video system. Its compact size and light weight (under 1.2kg) makes it more usable for self shooters, for use in confined spaces and on a drone or gimbal. “It is also a great second camera for someone using a C300 or C500,” said David Parry, product specialist, Canon UK and Ireland. “It’s quite a versatile product.”

The C70 has the same sensor as the larger C300 Mark III and can shoot at up to 120 frames per second in 4K (4096x2160) and at up to 180p in 2K Super16 crop mode (2048x1080). It also supports Dual Pixel CMOS auto focus and can record four-channel audio (as a separate file) at these high frame rates (something not possible on other Canon cameras). Audio is an important consideration for the new camera, as Parry expects that many users will be upgrading from models with more rudimentary audio support. The C70 has dual mini XLR inputs, as well as a 3.5mm jack and dual (stereo) built-in microphones. It also has a full size HDMI output, offering 4:2:2 10-bit external recording.

Moving to the RF lens mount not only gives it size and weight benefits, but should also offer better autofocus speed and image stabilisation – in body it uses electronic IS rather than sensor shift IS, although in standard IS mode it doesn’t crop the image. The built-in IS can work together with lens IS to give the best stabilisation. The slim RF lens mount means that there isn’t much space between the sensor and the lens, however Canon has still managed to fit in a 10-stop optical ND filter.

The sensor has dual gain output, for improved HDR recording with lower noise, and is claimed to offer more than 16 stops dynamic range.

It has dual SD cards and can record different formats to each, supporting both XF-AVC and MP4 (H.265 or H.264) at different resolutions, and in Intra and Long-GoP formats. However, it doesn’t support Raw shooting. “We feel this is the right mix of formats for people shooting at this level,” said Parry.

The C70 is the first Cinema EOS camera to feature the EOS iTR AF X (Intelligent Tracking and Recognition) system seen in the recently-launched EOS R5. The system uses a face and head detection algorithm based on deep learning technology, and can recognise a face even if it is partly obscured – such as when someone turns their back to camera. There is also Tracking AF, for any type of subject (selected using the touchscreen or joystick), which Parry believes will be particularly useful for news. Together they greatly improve the reliability of focusing on and tracking a subject.

There is also a new touchscreen-driven user interface, active all the time, designed to be familiar to anyone moving up from smaller cameras, while there are still the buttons Cinema EOS users will be used to from the larger models, including 13 assignable buttons and a multi-functional hand grip.

The C70 also supports vertical shooting, “which is getting more popular all the time,” said Parry, with the graphics moving round the screen to make them easier to read, and a second tripod socket at the side.

There is a USB-C port, which can be used for IP streaming or FTP (via an Ethernet/WiFi adapter), as well as Timecode I/O.

The EF-EOS R 0.71x mount adapter uses optical conversion to capture the full-frame angle of view of an EF lens even when used with a Super 35mm sensor. It also increases light transmission by about one stop, so that a 24mm f4 lens will be seen as a 24mm f2.8 image. The adapter enables full communication between the EF lens and camera body, and supports auto focus, peripheral illumination and chromatic aberration correction, plus the transfer of lens metadata.