Cinegy has released the latest version of its Multiviewer (v15.2), which it claims is “the most flexible multiviewer ever, great for on-premise and remote monitoring applications”. 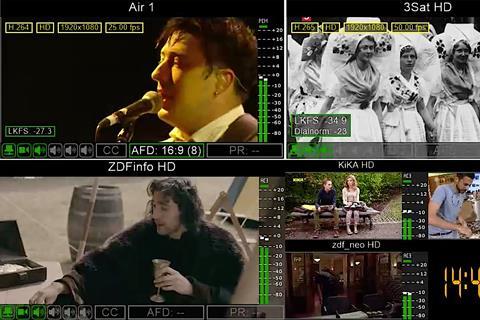 Cinergy: The latest version of Multiviewer at work

Cinegy Multiviewer 15.2 can display and analyse signals from a wide range of sources, raising alerts for any detected signal problems. It runs as a service operating on commodity IT equipment, and video streams can be received over IP, whether UDP/RTP, NDI or SRT via Ethernet, or using standard SDI cards.

Cinegy fully supports the SRT Alliance, which is visible in its entire product range. Its head of product management, Lewis Kirkaldie, said: “For years the world of broadcasting has been anticipating an open and reliable technology to move signals around. Numerous attempts have been made by different enthusiasts across the industry but none of them got closer to fulfilling the requirement than the brilliant SRT.”

“The new Multiviewer has a great many performance optimisations and compatibility enhancements to run even more reliably on the latest Microsoft operating systems, as well as embracing the latest and greatest technologies and protocols widely used in the industry,” he added.

Cinegy Multiviewer 15.2 also fully supports 8K workflows via IP or SDI. Cinegy’s 8K capabilities were first deployed in 2015 upon the release of its Daniel2 codec, which at the time was capable of decoding 16K video at 280 frames per second with an Nvidia Quadro M6000. Cinegy has further optimised and integrated Daniel2, making it ubiquitous through its software product range. Cinegy Multiviewer joined Cinegy Capture Pro and Cinegy Air Pro in supporting 8K, via IP (SRT/RTP/UDP), SDI, NDI (eg BMD DeckLink 8K Pro) confidence software broadcast systems when the major update v15 was released earlier this year.

Cinegy Multiviewer has a fully customisable interface that can be designed using a WYSIWYG multi-layout editor. It can drive two UHD monitors, providing enough space and resolution for the most demanding control room. When the control room is not near the equipment, or the viewer is not in the control room, Cinegy Multiviewer supports full RTP retransmission of the output screen in up to 8K 4:2:2 resolution, making any of the configured multiple layouts viewable anywhere in the building or in the world with remote control via a web interface.

The system can receive single programme or multiplexed feeds (MPTS) from standard satellite or cable receivers, relaying entire transponders via RTP/UDP onto the network, dramatically reducing the number of integrated receiver/decoders required for monitoring return feeds.